Since the original Edward Snowden revelations came out just over a year and a half ago, it’s become very easy to feel despondent about the whole thing. “Of course they’re spying,” is almost as often said now in the comment sections of these articles as the “if you have nothing to hide,” speech. Still, it’s often surprising how deep the rabbit hole actually goes and new evidence has emerged that shows the New Zealand Prime Minister John Key lied when he said his GCSB intelligence agency wasn’t spying on his citizens. It was and it was sending the data straight to the NSA.

While not necessarily targeting New Zealanders directly, the GCSB has been hoovering up their details indirectly as part of a mass-data dragnet of the Asia-Pacific region which has seen it collect data on many of its nearby countries and islands for years. That data was then sent on to the NSA as part of the GCSB’s position in the Five Eyes spy network (involving the UK, USA, Australia, Canada and New Zealand).

Revealed yesterday by new Edward Snowden documents released to the Intercept and NZHerald, the spying covers many friendly nation territories, like those of Indonesia and several French islands and has been ongoing for more than half a decade. Almost all of these islands and territories are not considered threats by the NZ government, which it previously claimed would be the only reason for large scale data collection by the GCSB. 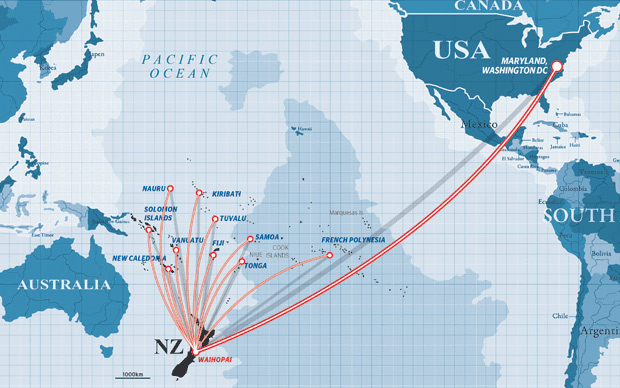 The information collected includes everything digital, from phone calls, to emails, text messages and VOIP conversations, all of which was gathered using the NSA’s XKeyScore software and immediately made available to that same US agency.  The reasoning for all of this data gathering? While claims of terrorism are par for the course, it’s in-fact said to be in order to gather political and economic intelligence for the USA. This may also be part of what NZ PM John Key previously stated was part of the “price of the club,” which he said recently was the reason he was sending troops to Iraq to fight ISIS.

Even though the revelations themselves are pretty inflammatory, perhaps the biggest impact from them will be the reaction by Key to the news, who once said that if mass surveillance in New Zealand could be proven, he and the head of the GCSB would resign from office.

KitGuru Says: I can’t see John Key actually following through with his promise, but it will be interesting to see how he tries to squirm out of it.