Home / Channel / These guys want weapons back in combat sports

These guys want weapons back in combat sports

Combat sports like boxing or MMA, use the human body as a weapon, but back in the good ol’ days, we used to see people beating each other to bloody messes with swords and spears. What happened to that? Apparently I’m not the only one asking that either, as the guys from Unified Weapons Master, want to introduce a new sport that harkens back to the old. Instead of blades, they’re Kick Ass like batons and everyone wear’s plastic Iron Man armour. It could be totally ridiculous, but it could be awesome too.

UWM has released a few videos over the past couple of weeks, showcasing what it believes the sport is all about: punches, kicks and hard weapon strikes.

Of course this is a stylised trailer, designed to grab your attention more than tell you about the sport. That’s saved for the other videos. Here we see Muay Thai fighter Sone Vannathy throwing some kicks and punches at the armour:

Those strikes aren’t at full force, but it’s not too encouraging that he seems to (and claims to) be doing very little damage with his attacks. If that is the case, if the armour is technically too good, it changes things quite a lot. For one, removing damaging strikes or attacks (at least in the traditional sense) from a fight, changes the nature of it quite a lot. Even point based combat systems in heavily regulated instances like the olympics, still have that element of fear that you could get your nose broken. Then there’s the fact that it’ll be a lot harder to set up technical strikes or combinations, when you can’t rely on your initial jab/cross for distraction. You’re also removing the opportunity for a finish, a knock down or submission, something that makes more vulnerable combat sports exciting to watch. 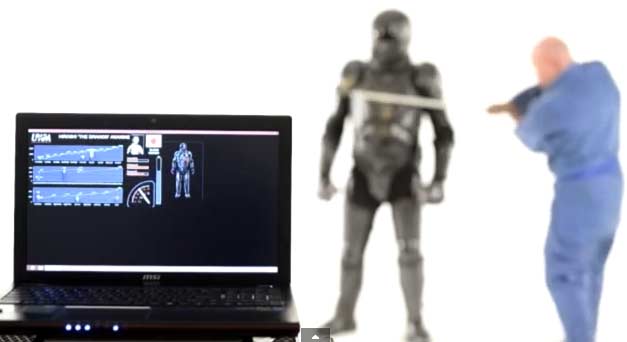 Guess which one of these guys has combat armour

However, even with that problem to work on, it doesn’t mean that these fights and technologies aren’t interesting. The armour itself is “smart,” in that it tracks strikes and forces applied and is therefore able to offer up a ‘damage’ break down for each opponent.

All in all it looks kind of cool, but whether it would be able to become a legitimate sport, or even, draw away talent from other, certainly more lucrative and established sports, remains to be seen.

KitGuru Says: I can’t see this becoming an actual sport, but for a quick exhibition or TV show, maybe. A bit like Full Metal Jousting.