On Monday in a joint press conference with NASA, SpaceX and Boeing announced their plans for flight tests of their Commercial Crew Programs, that will eventually lead to commercial manned missions to the ISS. With both companies launching manned test flights in 2017, we are still in for quite a wait.

“It’s an incredible testament to American ingenuity and know-how, and an extraordinary validation of the vision we laid out just a few years ago as we prepared for the long-planned retirement of the space shuttle,” said Charlie Bolden, NASA administrator, during the briefing at the agency’s Johnson Space Center in Houston. “This work is part of a vital strategy to equip our nation with the technologies for the future and inspire a new generation of explorers to take the next giant leap for America.” 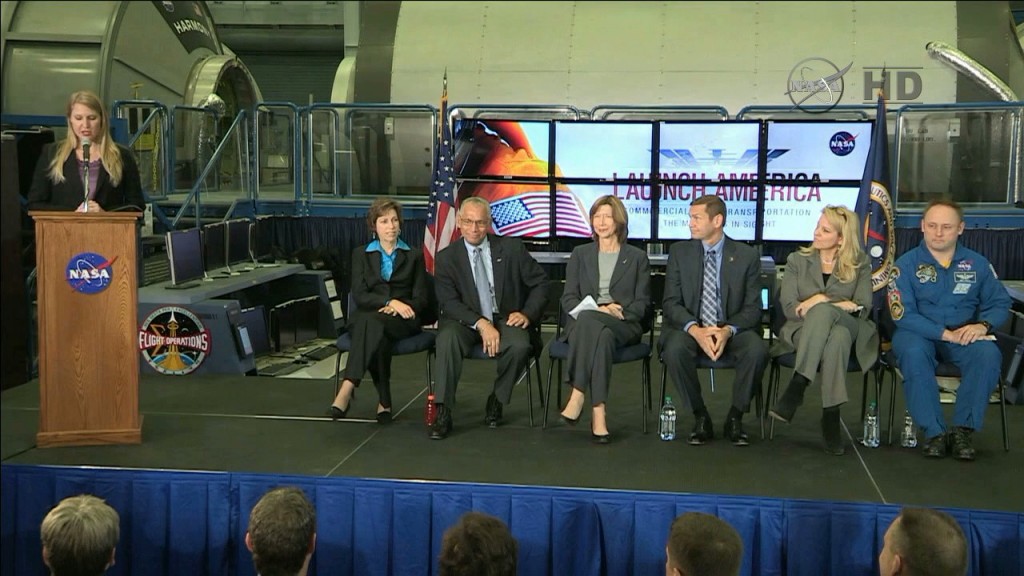 This is the first time both companies have had a joint press conference together since competing for and winning, NASA's Crew Commercial Program contract. “We understand the incredible responsibility we've been given to carry crew,” said Gwynne Shotwell, president of SpaceX.

It was also revealed that the STS-135 mission, the final flight of the space shuttle, delivered an American flag to the station as a prize for the first Commercial Crew astronauts to visit the orbiting laboratory. A second flag will be taken to the station and brought back as a symbol of success as well. “When we have both of these flags on the ground with their crews safely returned, we'll all be winners,”  Kathy Lueders, manager of the Kennedy Space Center-based Commercial Crew Program.

There is still a long way to go, with lots of testing for both companies and NASA before the 2017 manned launches, but all being well, this will free up more of NASA's resources so that it can work on more unmanned deep space missions. Also having two totally separate crew launch systems, should end the US reliance on Russian rockets to get US astronauts to the ISS.

KitGuru Says: It's a shame that this process will take so long, with the end of 2017 still being three years away, really it should have been started many years ago, before the US Shuttle was retired. But at least once it has been tested, assuming all goes well, the US will have manned access to low earth orbit on it's own terms.