I'm sure your gaming PC is astonishingly powerful and some of you probably have some pretty incredible custom built water cooling solutions, but they don't stand a chance next to the water cooling system currently being installed at the Los Alamos' Strategic Computing Center for the new Trinity supercomputer. Previous supercomputers at the SCC have been air-cooled, so this upgrade to the massive building needs to be in place before Trinity can start to be installed. Just be thankful you don't have to upgrade your house when you get a new PC.

In this case however the cost is a little more than what you might have paid for your gaming PC, with U.S. Department of Energy’s National Nuclear Security Administration paying $174 million, to US supercomputer hardware company Cray, to make a multi petaflop supercomputer system. According to the NNSA the supercomputer will be used to simulate “the safety, security, and effectiveness of the U.S. nuclear deterrent without the use of underground testing,” and when you put it like that, the $174 million bill suddenly doesn't look so bad. 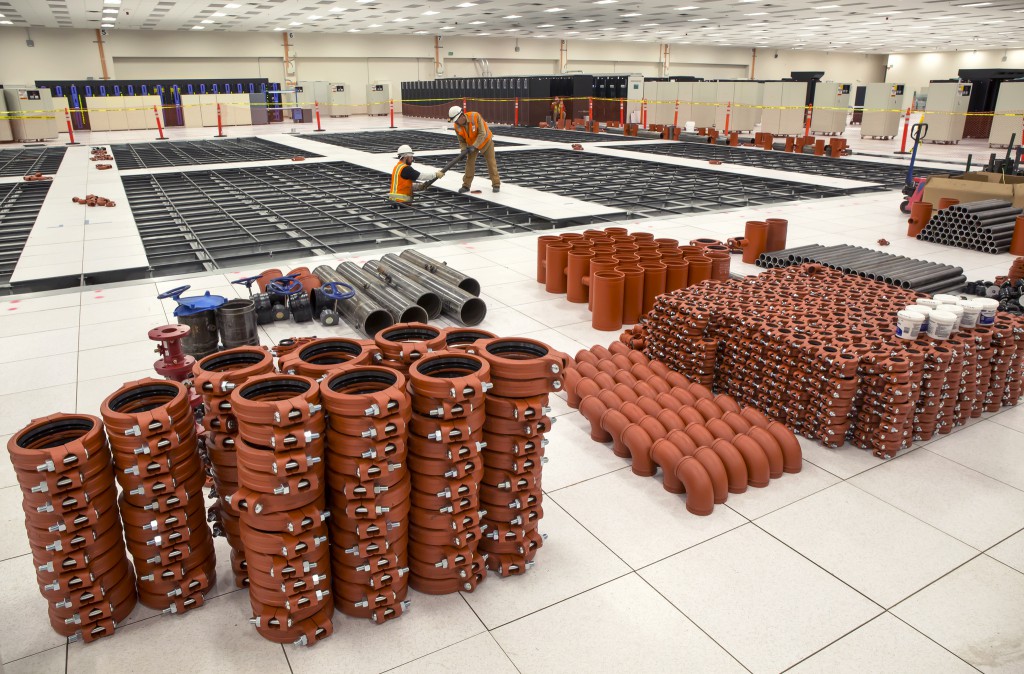 Ever wanted to be a computer plumber?

The actual Trinity supercomputer, a next generation Cray XC machine, will be placed on top of all of those pipes and running through the pipes will be water from Los Alamos National Laboratory’s Sanitary Effluent Reclamation Facility (SERF) that has been cooled by a cooling plant. No fancy lights on this machine though, so your gaming rig wins that round, for now. Inside the machine itself is going to be a combination of an unknown number of future-generation Haswells (probably 14-18 cores) and future Knights Landing processors (probably 72 cores per chip and 3 teraflops of peak performance!), complemented by an 82 petabyte capacity Cray Sonexion, distributed storage system with a throughput of 1.7Tbps (terabytes per second).

“If this system were delivered today, it would be the fastest in the world” according to Barry Bolding, vice president of storage marketing at Cray. But there is at least a year before the supercomputer is delivered and installed, so by then there may be new competitors for the top spot in the world-wide supercomputer ranking, the so-called top500.

The internals however, should give it the power it needs to compete with, if not overtake, the world's fastest supercomputer, since June 2013, the Chinese Tianhe-2 at China’s National University of Defense Technology. This system currently delivers around 33.86 petaflop/s (quadrillions of calculations per second) and is mainly made up of Intel Ivy Bridge Xeon processors and Xeon Phi chips, with a total of 3,120,000 cores. The current number two is only a measly 17.59 petaflops.

KitGuru Says: I really want to know where I can get one of those Knights Landing chips for my home PC, as I was reading about it my poor i7 4790K began to feel all kinds of inadequate with its 4 cores. I'm also excited to see if Trinity can get to the top spot in the top500 list, then again in a year who knows what other supercomputers might be under development, Skynet needs its brain after all.