First British astronaut under the ESA banner heading to ISS

The first British astronaut to head into space under the banner of the European Space Agency, Tim Peake, is set to launch into Low-Earth-Orbit (LEO) and join up with the International Space Station later today. He will be joined by American astronaut Tim Kopra, and Russian cosmonaut Yuri Malenchenko aboard the Russian built Soyuz rocket, launching from the Baikonur Cosmodrome in Kazakhstan.

Fuelling of the rocket is said to have already begun, with the intended launch of the rocket to take place at 11:03 GMT. The craft will enter LEO later today and is expected to dock with the ISS at 17:23 this afternoon. 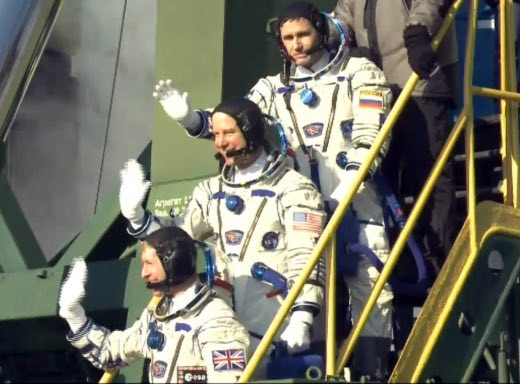 The trio of spacefarers are already aboard the rocket that will take them there, having climbed in at around eight o’clock this morning. For Peake this will be a long time coming, as he was on the reserves list for a flight that took place earlier this year, and is said to have spent upwards of 6,000 hours training for this event.

Last tweet before launch – GO for flight! Thanks for all the good luck messages – phenomenal support! #Principia pic.twitter.com/8jbxejHEEe

The fact that Peake is aboard this mission at all is quite something though. As the BBC explains, if ex-Science Minister David Willetts had not successfully argued for the UK to begin sending people into space again a couple of years ago, it would never have happened. It was only when a deal was struck following discussions with the ESA itself that British astronauts were given the chance and now Mr Peake is the first of a new generation.

KitGuru Says: Fingers crossed all goes to plan. This is the 46th flight to the ISS. We’re closing in on quite a milestone.