Home / Channel / Science / Spinosaurus walked on all fours, hunted on land and in water

Spinosaurus walked on all fours, hunted on land and in water

It’s time to once again go back to that iconic Dinosaur resurrection trilogy, Jurassic Park and correct our view without the 90’s tint, as it turns out that along with the raptors not being of the veloci-kind and the fact that they’d probably have been covered in feathers, the Spinosaurus Aegyptiacus from the third film wouldn’t have stood up on two legs, but seemed likely to have walked on four limbs while on land.

This speculative deduction is thanks to a new discovery of Spinosaurus bones in Morocco, which along with images of the first skeleton found in 1912 (and unfortunately bombed into dust during World War II) as well as some speculation based on modern animal anatomy, has allowed scientists to make some far more educated guesses about Spinosaurus’ habits and physiology.

The new bones includes parts of the head, spinal column, legs and major portions of the tail. As Ars explains, they were found in the Kem Kem or continental red fossil bed in Morocco, which has strata that dates back to the late Cretaceous period, some 70+ million years ago. 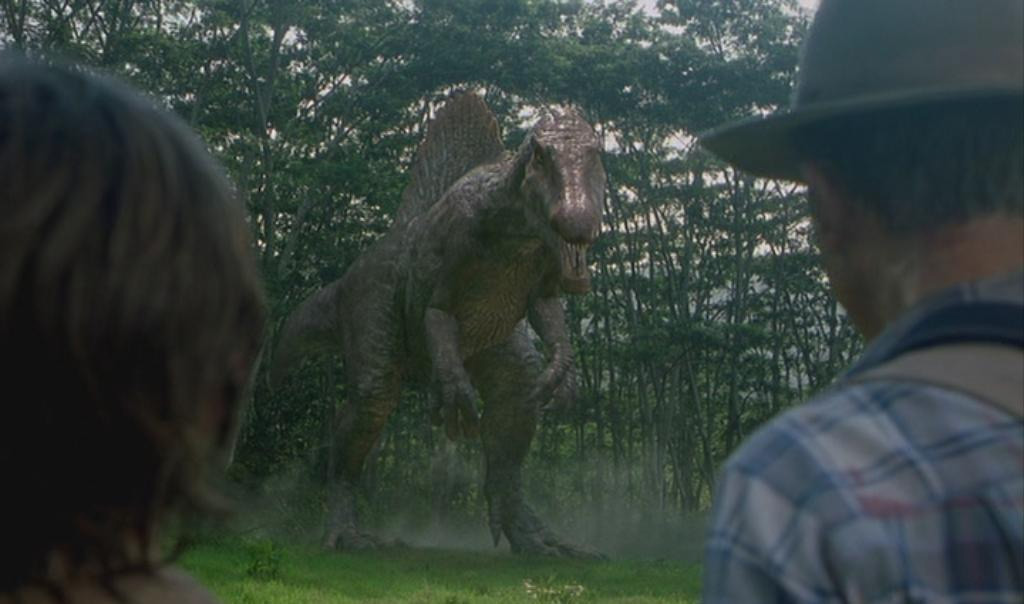 These have helped give researchers a much better insight into the size, shape and function of Spinosaurus. It’s believed that due to the smaller hips and forward tilted weighting of the skeleton, that Spinosaurus would have walked on all four limbs while on land, but would have been an accomplished swimmer and was far more adapted for hunting in the water. It featured nostrils towards the back of its skull, allowing it to breathe without raising its head out of the water. It also had crocodilian like passages near the front of its snout, which could have helped sense disturbances in the water, allowing it to strike without sight or smell.

While there are a lot of similarities between Spinosaurus and crocodiles though, there’s also a lot of cross overs with mammals, like the shortened hind limbs which were also found in the early ancestors of whales.

Nobody is still really sure what the sail was for though. In the past its been speculated that it could have been used for regulating body temperature, attracting a mate or even storing fat and water like a camel’s hump.

KitGuru Says: It’s also worth mentioning that the Spinosaurus, on all fours or not still weighed in at over 10 tonnes. It was a true monster of its time.

Previous Curiosity rover reaches main scientific destination
Next What is the net neutrality argument all about?