As much as wind power offers a simple and effective way of harvesting energy from ‘thin air,’ it isn’t without its drawbacks. The power generated isn’t as cost effective as other solutions, it’s dependant on something uncontrollable and the spinning blades from the turbines make a lot of noise and injure birds and bats. Spanish startup, Vortex Bladeless however, claims to have fixed these issues, by ditching the blades for vortex power. 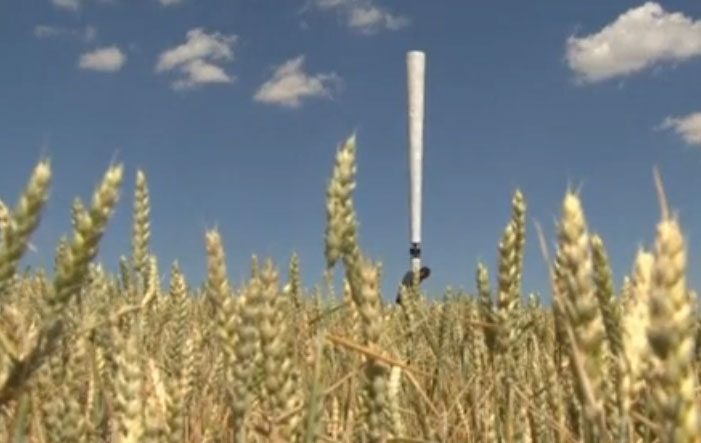 I wonder if this is what the Children of the Corn were worshipping?

The new turbines generate what’s described as ‘air whirlpools’ where they circulates air around the turbine rather than pushing rotational blades. The design wobbles back and forth in predictable patterns, which can then be converted into raw energy.

Made from fibreglass, the six metre tall designs are smaller, less intrusive and potentially far less destructive to wildlife than traditional turbines, since they don’t create pockets of low-pressure air at the tips of the blades, which have been known to be incredibly harmful to the lungs of bats.

Better yet, these designs are able to adjust as wind speed increases thanks to magnets implanted in the column.

Costs associated with the new design are also less than conventional wind turbines. They cost around 40 per cent less to build and have a smaller carbon footprint. Maintenance costs are reduced too.

Currently the designers are working on creating a commercial version of their 6m tall turbine for large scale deployment, as well as a smaller 3m variant which could be used in developing countries or added to the roofs at the consumer level to help augment already existing solar arrays.

KitGuru Says: Would you guys rather have one of these turbines near your house than the traditional triple bladed ones?