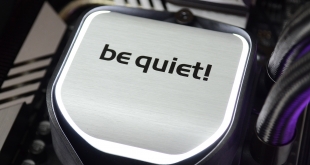 Be quiet! is no stranger to closed-loop liquid CPU coolers. In fact, I still use the company’s previous all-in-one cooler in one of my own systems. The Silent Loop AIO from be quiet! was supplied by Alphacool, so it was one of the very few closed-loop coolers to utilise a copper radiator. Be quiet! has continued its trend of standing out from the crowd with its latest AIO design, as the new Pure Loop features a pump system attached to the tubing rather than being integrated into the CPU block. How does this approach affect thermal performance? Let’s find out.

The new be quiet! Pure Loop is probably the most interesting closed loop all-in-one CPU cooler to be launched this year, with its method of coolant delivery via an inline pump mounted between the tubing. KitGuru has never tested an AIO with this coolant delivery system deployed so we are very eager to find out what the benefits of this system are and whether it improves or hinders performance.

We were initially unsure about the OEM supplier of the Pure Loop. However, after a little research of other AIOs with similar inline pump arrangements, one particular product stood out.

Components of the Enermax LIQFusion that was launched in 2018 looks extremely similar to the Pure Loop, the radiator and CPU block base plate look almost identical and both coolers share the inline pump design. be quiet! later confirmed that the Pure Loop series is in fact supplied by KD Industrial, an OEM that does also supply coolers to Enermax.

As usual with be quiet! products, there is a focus on noise levels with the Pure Loop AIO, the cooler is equipped with 120mm or 140mm Pure Wings 2 fans depending on radiator size. These fans have been around for a while and we are very familiar with their low noise levels. This review will focus on the Pure Loop 360mm which is equipped with three 120mm Pure Wings 2 high-speed fans, with PWM control up to 2000 RPM. 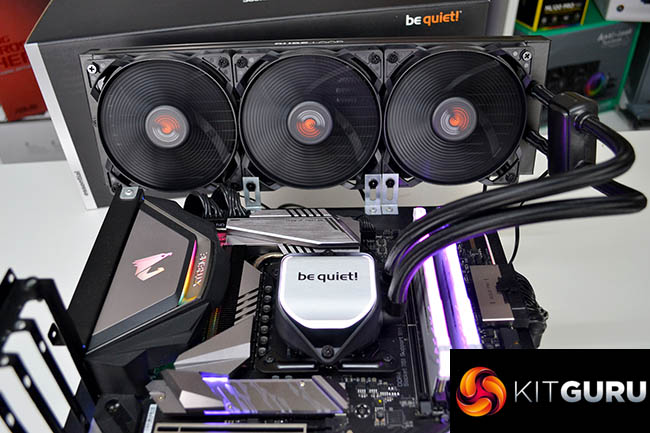 Having the pump integrated into the tubing potentially allows other areas of this cooler to be designed differently to the majority of other AIO coolers currently available, such as the size of the CPU block. Without having the pump mounted to the CPU block the dimensions of the CPU block can be reduced, which in my opinion should improve the appearance. There will also be less wiring at the CPU block which again will tidy up the look of the installation.

The CPU block features simple white LED illumination so there is a single 3-pin power cable attached to the block, any additional wiring is attached to the pump which is close to the radiator so logically thinking, this should make the cable management easier which again will improve the final appearance once everything is installed.

Another interesting feature about the Pure Loop AIO series is that the system is refillable. When be quiet! originally introduced the Pure Loop, the company was keen to emphasise their opinion on AIO refilling. be quiet! claims that closed-loop AIO coolers should be checked and refilled every two years. There is a refill port integrated into the radiator and be quiet! include a bottle for periodic topping up of the coolant which the company claims to guarantee a long lifespan.

The Pure Loop AIO series is part of the be quiet! essential range which means it is competitively priced without compromising on quality. The range starts with a suggested retail price of £82.99 for the 120mm version, increasing to £114.99 for the flagship 360mm model. This is by no means the cheapest AIO cooler on the market, but it is priced lower than 360mm offerings from some other premium brands.