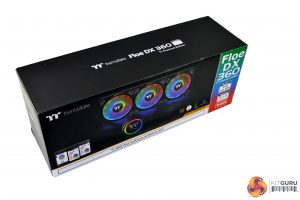 My first thought when getting a look at the Floe DX 360 RGB’s box was, “that’s a pretty small box for such a big cooler”, so, obviously nothing has been wasted on packaging, which is good.

The box clearly shows what’s inside, with a large image of the product in the centre, the name and technical info on the right and a small image of the software to the left – nice and simple. 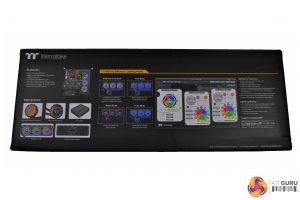 The rear of the box shows some more closeup images of the components included, a small list of features, a collection of RGB photos and further information about the software and android app. What is rather odd is that, on the packaging, there is no reference to the Alexa compatibility (yes, that’s right – a voice controlled All-In-One cooler), which you would think would be a major selling point… 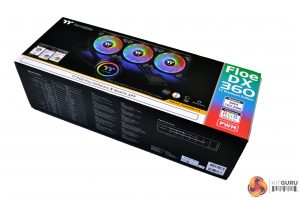 Along the bottom of the box is the full specifications and a small graph indicating performance. 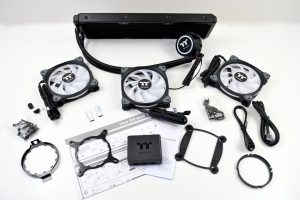 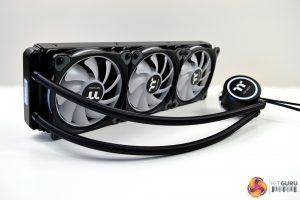 Once removed from the box and after uncovering the plastic wrapping, it instantly hits you how great this cooler looks. It has a real quality feel to it and so it should, since it’s in the higher price range for a cooler of this type. 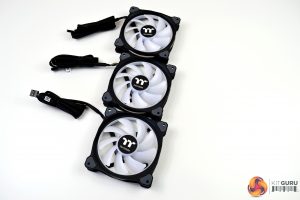 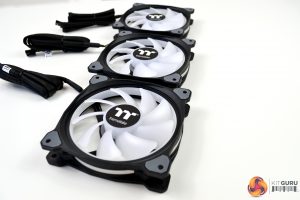 The three Ring Duo fans included are high static pressure, which look very clean even without the lighting on. There is some visually pleasing angular shaping to the four corners of the fans and around the mounting holes, there are anti vibration, noise dampening rubber pads. However, the fan cables have a proprietary connection, so cannot be installed on a standard three or four pin motherboard header and must be connected to the Thermaltake RGB control module included. The cables connected to the fans measure a huge 920mm in length. 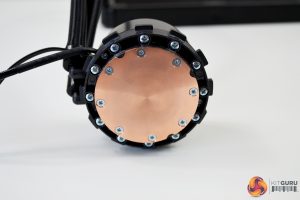 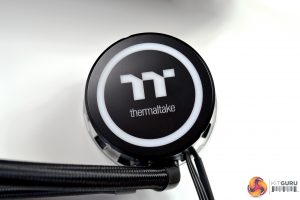 Looking at the CPU block/pump, it seems to be accurately machined and manufactured from high quality copper. The pump, which is rated at 12V 3600RPM, is contained in a black plastic housing, which has an RGB ring around the perimeter and the Thermaltake logo in the centre is also a RGB zone. Thermaltake state that “Combined with a copper base plate and a reliable pump, the Floe DX series provides high performance and unparalleled heat dissipation”. After carrying out our tests, we will find out how good the performance actually is. 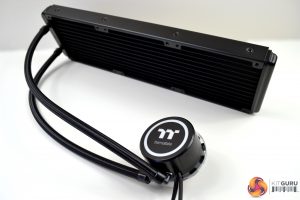 Moving onto the radiator, that too looks great. There isn’t much that can look wrong about an all-black Asetek patented radiator, though, to be fair. The dimensions of the radiator are 390mm long, 120mm wide and 27mm deep without fans fitted, increasing to 52mm thick with fans installed.

As we have examined with many All-In-One coolers recently, the tubing is rather narrow, at approximately 11mm, including the braided sleeving. Due to the size of the cooler, it does look a little out of proportion. The walls of the tubing are reinforced, so are strong enough to allow reasonably tight bends without kinking. 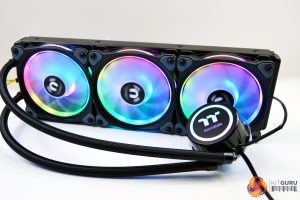 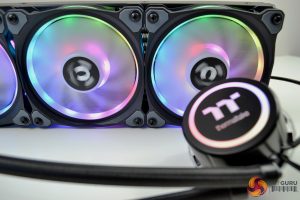 We were excited to see how this cooler looked, once powered up and the lighting turned on, so we eagerly found a spare power supply and rigged it up. It was worth the effort! As soon as it powered up, we were greeted with a beautiful display of colour. We have seen a boatload of RGB lately, but this has to be one of, if not, the best-looking RGB coolers on the market. 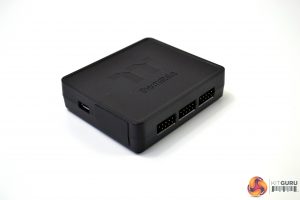 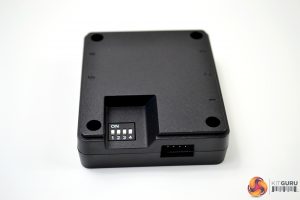 The controller is designed with a DIP switch on the back. Hence, you can set a number for each controller easily. You can add up to 5 devices to one lighting controller and up to 16 controllers to the software. The controller and the coding guide are included in all packs. It is recommended to connect up to 3 controllers on one peripheral cable (Molex) only. The controller measures approximately 73mm x 64mm x 20mm (L x W x D) so should be relatively easy to locate somewhere inside most ATX cases with minimal fuss. We will look at the controller and software later during the installation process.