With no official support for the Thermaltake Floe DX 360 to integrate with motherboard manufacturers’ own RGB lighting software, such as Gigabyte RGB Fusion and Asus Aura Sync, you are encouraged to use Thermaltake’s TT RGB plus software.

This comes in the form of a Windows application or Google Play Store App for Android and Apple Store App for iOS devices. Thermaltake refer to this system as the TT RGB Plus Ecosystem, which provides many possibilities for playing with colours, synchronising lights to games, music, CPU temperatures or other TT RGB PLUS products, including case fans, CPU/VGA waterblocks, AIO CPU coolers, PSUs, LED strips and peripherals. 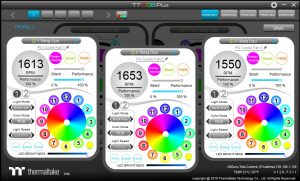 On both Windows and Android based devices, the TT RGB Plus software is very simple to setup and use. The main setup page provides you with options to give each device a custom name and scroll through over twenty different lighting modes such as Black Hole, Aurora, Twinkle, Heartbeat and swirl to name but a few. 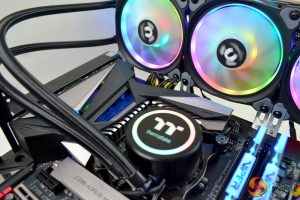 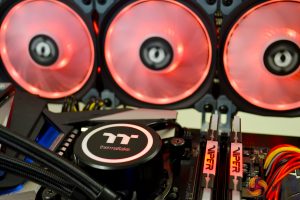 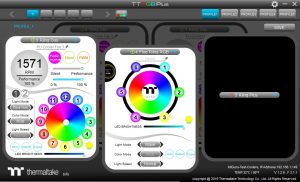 Each RGB device on the system can be configured depending on personal preference, with a combination of all settings mentioned above. Fan speed can also be adjusted in the software individually, with options for performance, silent and PWM. In PWM mode, you can adjust the fan speed slider from 0-100%.

Thermaltake have added the function of voice control for the TT RGB Ecosystem via Amazon Alexa. Unfortunately, at the time of writing, this is only available on the U.S Amazon Skills website and not in the UK or EU. Thermaltake have confirmed that they are working with Amazon to release a UK version of the Amazon Skill, which should be available very soon.

Due to this, we were unable to test the voice control as there was no workaround available, which was unfortunate.