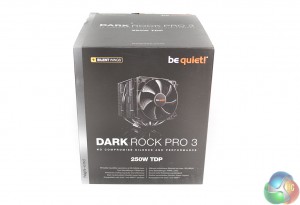 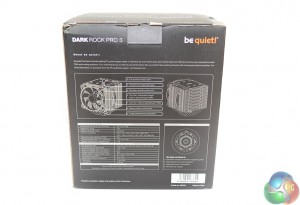 be quiet! packages the Dark Rock Pro 3 in black packaging which outlines the cooler’s key specifications.

The 250W TDP and low-noise operation are pointed out on the packaging’s front side, while an annotated drawing outlines further performance parameters on the box’s rear. 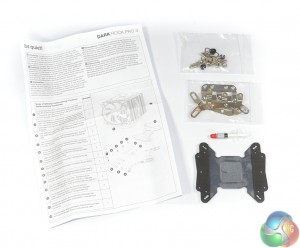 A detailed installation guide accommodates the cooler’s mounting hardware. be quiet! opts for metal mounting hardware to give the 1.2kg unit the best chance of being held securely. All current Intel and AMD sockets are supported by the Dark Rock Pro 3. 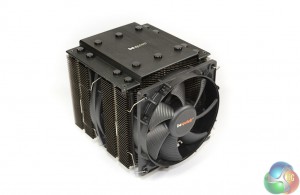 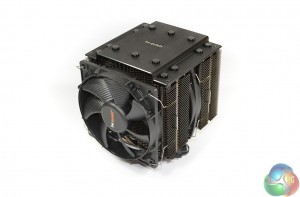 Clipped to the front side of heatsink is a 120mm be quiet! SilentWings PWM fan. The unit rotates at a maximum of 1700 RPM and is capable of shifting up to 57.2 CFM of air for a noise output of 21.5 db(A).

Sandwiched between the 45-strong aluminium fin arrays is another fan – this time a 135mm SilentWings PWM model. The larger unit rotates at the lower rate of 1400 RPM but, thanks to its increased diameter, shifts almost 68 CFM of air for a 20.8 db(A) noise level.

Connecting the two fin arrays is a solid, dark-coloured aluminium plate embossed with the be quiet! logo. The plate enforces equal distance between each tower and, therefore, enhances the heatsink’s structural rigidity.

A valid assumption would be that the aluminium plate acts as additional heat-dissipation surface area. I am, however, slightly skeptical of this suggestion due to the fact that the heatpipes make very limited direct contact with the plate – they are in contact via a separate cap. Equally valid suggestions for the covering plate’s addition would be aesthetics and, perhaps, moderating convection heat transfer from external sources. 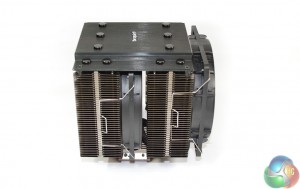 At 150mm in length and 163mm tall, the Dark Rock Pro 3 (DRP 3) clearly has the potential to cause interference with large RAM heatspreaders and VRM heatsinks. be quiet! compensates for this by making the height of the front fan adjustable. Component clearance will be outlined on the installation page.

be quiet! chose not to opt for closing the sides of the fin arrays. It is likely that the company is relying on the relatively high air pressure of the front fan’s flow to penetrate the fin array, rather than spill out of the side. The aluminium top plate should also help reduce air spillage out of the heatsink.

A 22mm-thick fan is installed in the central position. We see no reason to suggest that a ‘standard’ 25mm fan will not fit, provided the mounting points permit and its dimensions are kept within the clearance limit. 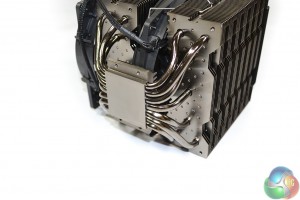 A base comprised of what appears to be nickel-plated copper brings together seven 6mm heatpipes. Provided the base can effectively spread the thermal load across its surface, the heatpipe layout appears to be very well-thought-out.

Three heatpipes are positioned at similar intervals throughout the fin arrays’ central regions, while be quiet! doubles up towards the heatsink’s edges. In theory this appears to be a good choice; the bulk of the thermal load is transferred to the fans’ most effective regions, with a lower proportion being conducted to their potential dead spots in the central areas. 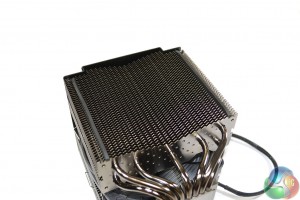 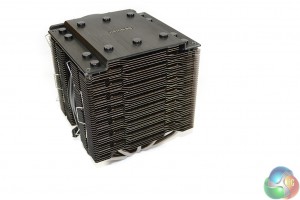 A number of unique optimisations of the fin array are incorporated by be quiet!. Coupled with a vacuum-inducing, inwards-sloping shape, the serrated fin design on each array’s front end allows air to enter and pass through the structure even while the fans spin at lower speeds. An additional benefit of this design could be the potential to increase the turbulence of the air stream which enters the fin array.

The back end’s design is a little more unusual. Alternating grooves and extrusions have the potential to act as flow adjustment surfaces which enhance the rate of heat removal. There is the likelihood that the design is relevant to make a third fan a worthwhile addition to the CPU cooler.

A number of small dots are present on each of the fin surfaces. Such additions help to increase convection heat transfer thanks to their ability to increase the airflow’s turbulence. In theory, the dots should add little (if anything) in regard to noise output. 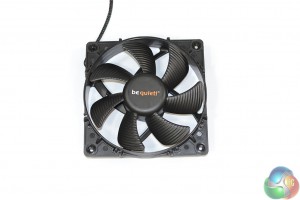 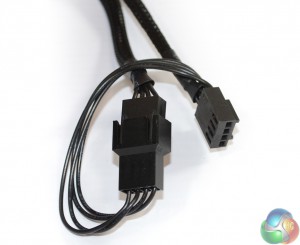 A pair of SilentWings fans from be quiet! accompanies the Dark Rock Pro 3 heatsink. Vibration-damping elements limit the amount of noise that is generated by each fan when it is connected to the heatsink. As noticed by its omission from the picture, removal of the interior – 135mm – fan requires the aluminium top plate to be separated.

The fan blades consist of a grooved structure which allows them to shift their relevant volumes of air with a reduced noise output. A copper-core Fluid Dynamic Bearing (FDB) is used for the 120mm unit, while the larger 135mm model relies upon an electromagnetic motor with six poles.

A single 4-pin PWM connector attaches to one’s motherboard before converting into a splitter which powers both fans. Black braided fan cables are used to enhance the appearance of a system that makes use of the be quiet! Dark Rock Pro 3.