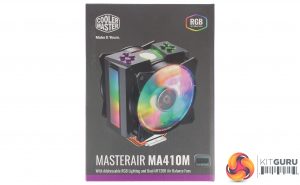 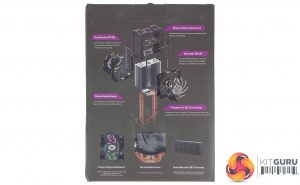 The MA410M packaging follows a very similar aesthetic to other current Cooler Master coolers, sporting a lot of purple, and the newer Cooler Master logo. The front of the box provides a very clear image of the cooler in all its glory, while the rear show an exploded view of the coolers assembly, highlighting the various innovations applicable too this cooler. In the box, we find the cooler full assembled, alongside an accessory pack. 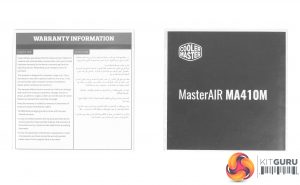 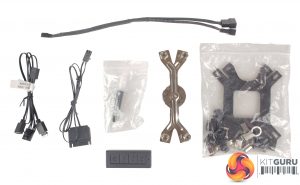 Warranty and installation guides are included, as well as a host of mounting brackets and pieces for all current CPU sockets, as well as some older ones.

A number of cables are included, with one 4-pin PWM extension cable for the two included fans, while the remaining cables are for connecting up the LEDs. A small controller is also included which is nice to see, allowing you to make use of the LED functionality if your motherboard doesn’t support the newer addressable RGB header. 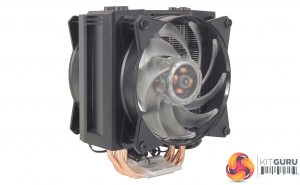 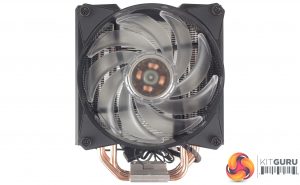 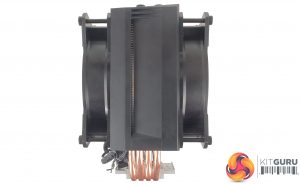 The cooler itself shares a very similar design to some previous Cooler Master coolers, like the Hyper 212 Evo, or MasterAir MA410P but the inclusion of the black plastic Air Guide Armour does provide a much more aggressive aesthetic, which should suit more modern system builds. The Master Air MA410M dimensions are 111.8 x 130.9 x 165.1 mm (LxWxH). 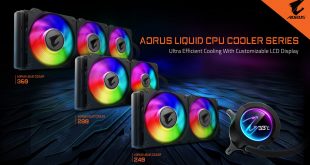