Advanced Micro Devices recently set a goal to improve energy efficiency of its accelerated processing units by 25 times by 2020. To achieve this goal, AMD will have to outpace historical energy efficiency trend by over 70 per cent, but the company claims it knows what to do and even outlined a roadmap about features it needs to implement.

There are several trends in the personal computing industry (note that PCs today are largely mobile PCs in different form-factors). First, devices need to get thinner, slimmer and lighter. Second, devices need to gain battery life. Third, user interfaces need to get more intuitive and user friendly. Fourth, overall performance and feature-set of devices need to improve. While the first two trends require consistent decrease of power consumption by PC components, another two require increase of compute performance. Unfortunately, it is impossible to improve processing speed at a rapid pace and lower power consumption significantly at the same time, which is why developers of devices and their components have to balance between the two.

When it comes to compute units, the balance between the amount of processing work they can do and their power consumption is called energy efficiency. The general term itself is very broad, abstract and does not exactly consider use cases. For example, if a 35W notebook processor offers two times higher performance than a 35W processor released a year ago, one could say that its energy efficiency improved by two times, but the problem is that 35W processors no longer fit into modern notebooks. As a result, in the real world one has to find ways to reduce power consumption slowly while gradually improving compute performance. In many cases, chip designers take step-by-step approach and focus on either performance or power consumption. 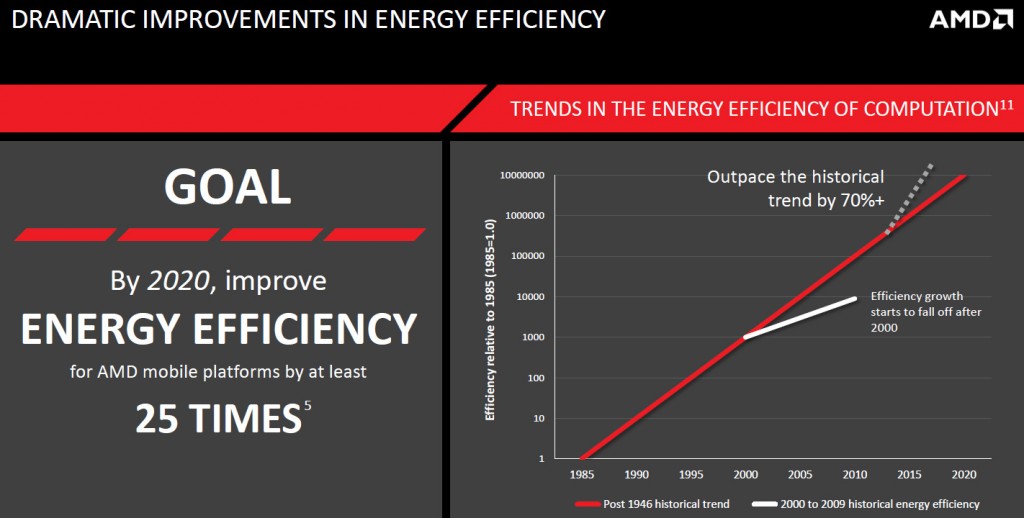 Historically power consumption and performance (and the balance between the two, energy efficiency) were determined by manufacturing technologies, micro architectural peculiarities as well as various hardware tweaks. For a number of years now AMD has been saying that in order to improve energy efficiency going forward, software needs to use the right hardware for particular tasks. Paralleled tasks need to be computed on highly parallel GPU cores (since it takes them less time to get the work done, they also consume lower amount of energy than genera-purpose cores), whereas serial tasks have to be performed on general-purpose CPU cores. AMD believes that as software starts to use heterogeneous processing capabilities of modern processing units through OpenCL application programming interface, energy efficiency of PCs will improve over time.

But while AMD pins a lot of hopes on its accelerated processing units and future software, it does not plan to give up improvements on the hardware level. Among the things AMD intends to implement in its next-generation APUs and CPUs are integrated voltage regulation, ability to scale voltage per every part of a chip, inter-frame power gating, voltage adaptive operation and so on, according to a presentation by the company. Among other things, AMD proposes to dynamically boost performance in certain applications to get the job done quicker and save power on the system level. At the same time, AMD plans to implement an intelligent technology that does prevents dynamic increase of clock-rates for apps that do not benefit significantly from higher frequencies. In general, AMD intends to enable its chips to fine-tune their performance based on workload and environment contexts. 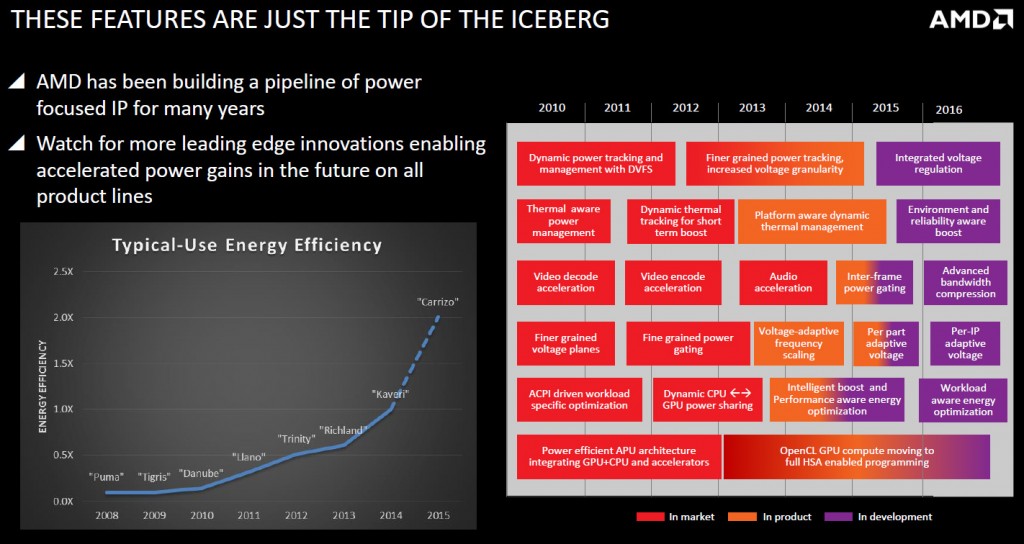 It should be noted that reduced power consumption is only a part of the equation in the energy efficiency metrics. Performance is an important thing since low-performance chips will not able to compute next-generation workloads. Therefore, it is tremendously important that AMD's microprocessors based on the code-named “Xen” (x86) and “K12” (ARMv8) micro-architectures deliver higher performance compared to today's general-purpose cores; it is equally important that AMD's future graphics processing units also deliver significantly better performance than today's GPUs. Regrettably, AMD said no word about how it plans to increase performance of its central processing and graphics processing units or, at least, what kind of increases should we expect.

Traditionally, AMD sets goals, but does not reveal exact plans. It is unknown which technologies will be incorporated into next-generation Carrizo processor and which will be integrated into its successors. The only thing we do know is that AMD has a technology roadmap for many years to come and that plan will be gradually executed.

KitGuru Says: While AMD sets pretty ambitious goals in terms of improving energy efficiency of its platforms, one should keep in mind that a lot of things depend on third-party PC components, software, workloads and use scenarios. As a result, expect AMD (and others’) compute platforms to gain energy efficiency going forward, it is just a natural process. Still, when it comes to commercial products, they need to hit actual performance and power consumption targets to be successful, not just feature abstract energy efficiency.