“In 2016 – 2017 we are [are going to release] a very high-performance server APU,” said Forrest Norrod, Senior vice president and general manager of enterprise, embedded, and semi-custom (EESC) business group at AMD. “We see one of the key assets for us in the enterprise business – particularly as computational demand continues to increase – as being able to wed [processors and graphics] together. It gives us something that is worth more than the sum of all parts.”

AMD did not reveal any peculiarities of its upcoming APUs for high-performance computing and workstation applications, but indicated that the chips will have multi-TFLOPS compute performance. It is unclear whether the new APUs will offer particularly high performance in supercomputer applications that require double precision FP64 performance, but it is obvious that the APUs will be considerably more powerful than existing chips. 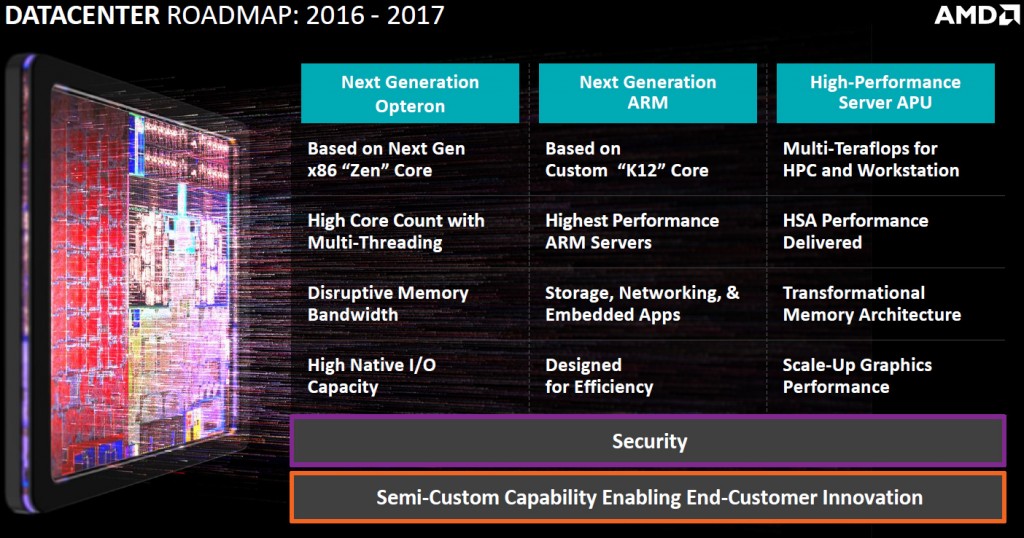 Previously it was reported that AMD intends to release a multi-TFLOPS APU later this decade to address the market of HPC. Last month a slide, describing a concept of high-performance APU, leaked to the Internet. If the slide is accurate and comes from AMD, then the company’s high-performance APU could integrate up to 16 x86 “Zen” cores with two-way simultaneous multi-threading technology and 512KB L2 cache per core, 32MB L3 cache as well as a new-generation “Greenland” graphics engine with ½ double precision compute rate. The chip is also projected to feature a quad-channel DDR4 memory controller with enhanced ECC capabilities that supports up to 256GB of memory per channel. To speed-up memory bandwidth-demanding applications, the APU could feature on-package 16GB of HBM2 memory with 512GB/s or higher bandwidth.

Keeping in mind that AMD will only begin to roll-out its microprocessors based on “Zen” micro-architecture next year, it is likely that the company will introduce its APU for HPC applications only in 2017. By that time GlobalFoundries’ 14nm FinFET (14nm LPP) process technology that supports things like 2.5D packaging (needed for installation of HBM memory) and a number of enhancements for high-performance devices will get mature and will be suitable for large chips.

KitGuru Says: High-performance APU seems to be a interesting concept for various HPC workloads. What will be interesting to see is how well such chip could perform in consumer applications. Modern integrated graphics cores easily outstrip cheap low-end graphics cards. However, very powerful APUs could leave behind graphics adapters that cost $150 – $200, something that will disrupt the market of discrete graphics cards in general.