Advanced Micro Devices on Tuesday introduced its new family of embedded accelerated processing units (APUs) and central processing units (CPUs) with heterogeneous system architecture (HSA) capabilities. The new chips code-named “Bald Eagle” are based on the design known as “Kaveri”, which is already available for desktops. 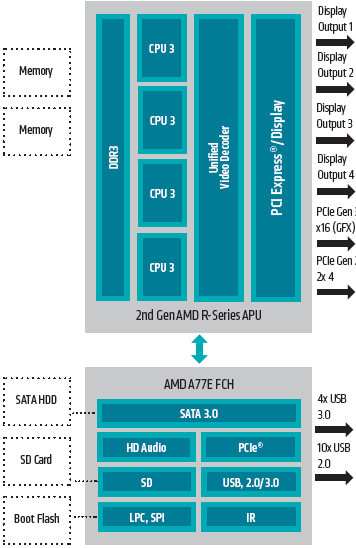 “When it comes to compute performance, graphics performance and performance-per-watt, the 2nd generation AMD embedded R-series family is unique in the embedded market,” said Scott Aylor, corporate vice president and general manager of AMD embedded solutions. “The addition of HSA, GCN and power management features enables our customers to create a new world of intelligent, interactive and immersive embedded devices.”

KitGuru Says: Thanks to availability of the new RX-series APUs, more programs for embedded devices will take advantage of the GPGPU and HSA technologies, which is a good thing for AMD in general. The latter is currently the only provider of embedded chips with the aforementioned technologies.

An alleged roadmap of the Intel Xeon series of processors has leaked, showing when we …