Advanced Micro Devices on Thursday said that as a part of the strategy to simplify and sharpen the company’s investment focus, AMD would exist the micro-server systems business, which was formerly known as SeaMicro. The company will retain SeaMicro’s Freedom fabric and other intellectual property, but will cease to invest in development of dense servers. Instead, it will focus on high-performance server CPUs.

When AMD acquired SeaMicro for $334 million in early 2012, it was a rather bold move since the company was not making any money back then and the market of micro-servers was not something significant as well. SeaMicro was known for its Intel Atom and low-power Xeon-based servers and had Freedom fabric, a technology that simplifies building ultra-dense servers. Back then it seemed that SeaMicro had a lot of prospects, but since the market of micro-servers has never really taken off and AMD has not introduced a single new SeaMicro product in three years, sales of its dense servers dropped dramatically in the recent quarters. 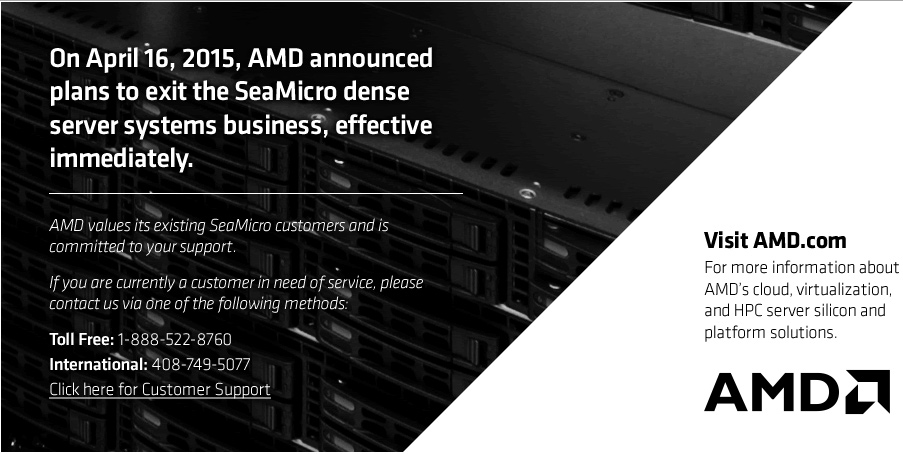 Since SeaMicro did not bring AMD any significant money, but still had operational and R&D costs, the chip designer decided that it was time to abandon the business unit. The latter was not sold to another company and was not spun off, AMD simply decided to shut SeaMicro down, but to retain its intellectual property, which may be used eventually for the company’s platforms for various servers.

“At the corporate level, we continue aligning larger portions of our R&D investments to take advantage of long-term growth opportunities across our EESC segment,” said Lisa Su, chief executive officer of AMD, during the company’s quarterly conference call with investors and financial analysts. “As we prioritize our R&D investments and simplify our business, we made the decision in the first quarter to exit the dense server systems business as we increase investments in our server processor development.” 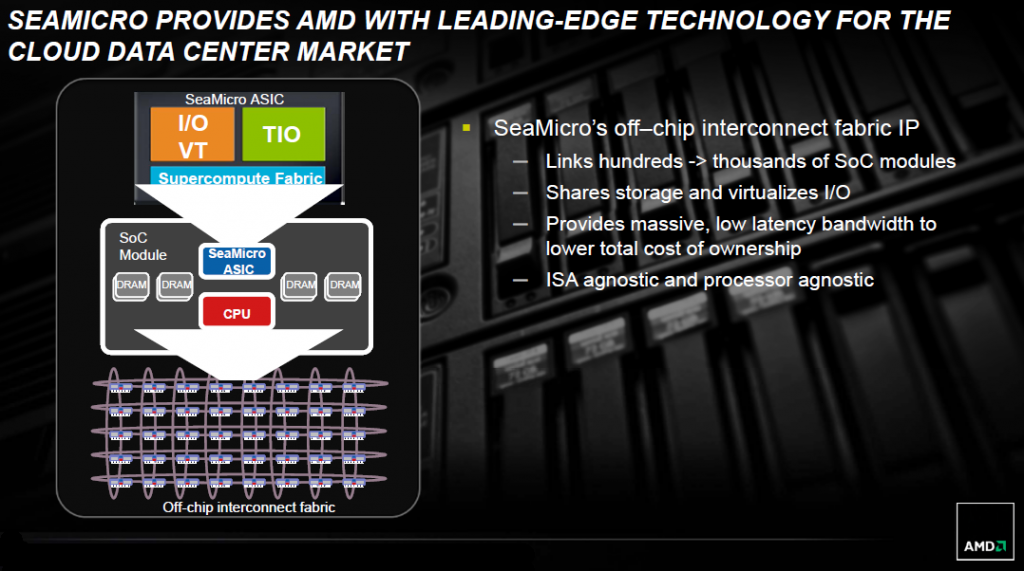 One interesting this to note is that not only AMD is increasing its spending on development of server-class microprocessors, but it is also focusing on high-performance x86 and ARM central processing units (i.e., Zen and K12).

“We see very strong opportunities for next-generation, high-performance x86 and ARM processors for the enterprise, datacenter, and infrastructure markets and we will continue to invest strongly in these areas,” added Mr. Kumar.

While it is great to see that AMD is increasing investments in high-performance microprocessors, it should be pointed out that AMD simply has to boost spending on design of future both CPUs and GPUs. Design of chips to be made using FinFET process technologies costs around three times more than design of ICs made using a thin planar process technologies (e.g., 32nm, 28nm, etc.). When a company has to spend $80 – $100 million on one chip design instead of $30 – $40 million before, this firm has to increase its budgets. In AMD’s case this means abandoning businesses that make little sense and dropping projects that are not vital.

As a result of the decision of to shutter SeaMicro, AMD recorded $75 million of special charges in Q1 2015, primarily related to impairment of previously acquired intangible assets, of which $7 million will be paid in cash.

KitGuru Says: Keeping in mind that AMD has not released any new SeaMicro product since 2012, shutting down the server maker is hardly a negative event for the industry. The big question is how this reflects the prospects of micro-servers in general. It seems that such machines with low-power microprocessors are not exactly getting popular. Moreover, a bunch of chip designers ceased to develop ARM-based server-class system-on-chips for micro-servers in the recent quarters. As it turns out, micro-server market is shrinking even before micro-servers became mainstream and any kind of competition started…