Intel Corp. introduced its latest Itanium microprocessor code-named “Poulson” back in 2012 and since then the company has neither updated the lineup of its IA64 chips, nor revealed exact plans about future Itanium products. But while Intel has been consistently adding new reliability, availability and serviceability features to its Xeon E7 processors, making them suitable for mission-critical systems, the company is still committed to release new Itanium products.

“Intel remains committed to the Intel Itanium product line and to the delivery of the next-generation Intel Itanium processor, code named ‘Kittson’,” said Anna Cheng, a spokeswoman for Intel. “Kittson will be manufactured on Intel's 32nm process technology and will be socket compatible with the existing Itanium 9300/9500 platforms, providing customers with performance improvements, investment protection, and a seamless upgrade path for existing systems.” 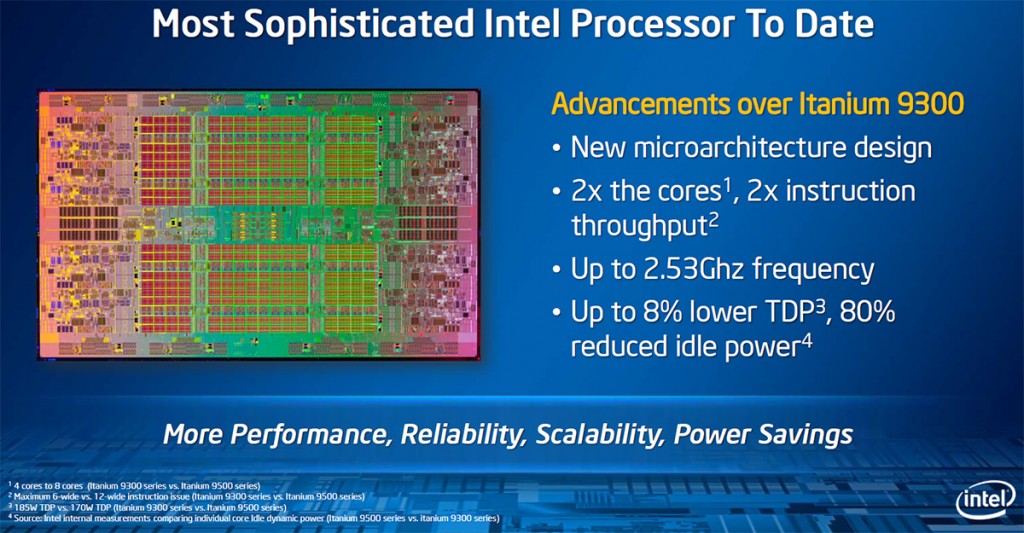 The Intel Itanium “Poulson” 12-wide issue central processing unit integrates eight multi-threaded cores with new micro-architecture and improved Hyper-Threading technology with dual domain multithreading, a ring-based system interface and combined 54MB cache on the die. Frequencies of the latest Itanium 9500-series processors range from 1.73GHz with a power level of 130W to 2.53GHz at a power level of 170W. High speed links of the new chips provide peak processor-to-processor bandwidth of up to 128GB/s and memory bandwidth of up to 45GB/s.

The “Poulson” chips added four new instructions that were supposed to lay the foundation for the Itanium architecture to grow with future needs as well as a number of technologies that made the chip even more reliable than predecessors.

Back in 2012, when the Itanium 9500 “Poulson” was released, Intel still had multiple partners, who used IA64 chips, including Bull, Hitachi, Hewlett-Packard, Inspur, Huawei and NEC. As a result, the company had a roadmap for future processors, including the code-named “Kittson” chip made using 22nm fabrication process. Around the time, Intel started to add RAS capabilities to its Xeon E7 processors based on the industry-standard x86 architecture. As a result, Bull, Hitachi and NEC decided to switch to Xeon chips and HP remained the only partner with more or less significant volume requirements for Itanium CPUs.

Since demand for Itanium central processing units dropped significantly in 2012, Intel reconsidered its Itanium roadmap. Instead of using its 22nm technology to make “Kittson” products, the world’s largest microprocessor supplier decided to continue using the 32nm node for the CPU. Moreover, the company does not want to talk about innovations the “Kittson” products will bring.

“Intel, HP and our other OEM partners remain in discussion about the timing and feature set of Kittson,” added Ms. Cheng. “We have not disclosed any product plans after Kittson.”

While Intel will clearly release one more iteration of the Itanium, even HP does not believe in the IA64 platform. HP introduced its first Intel Xeon E7-powered NonStop X machines for business critical applications in November, 2013, and then followed with Integrity Superdome X business-critical servers featuring Intel Xeon E7 in December, 2014. The NonStop X machines run NonStopOS, whereas Superdome X supports SUSE Linux Enterprise 11 Service Pack 3, Red Hat Enterprise Linux 6.5, 6.6, and 7.0. Intel Itanium-based machines from HP can run HP-UX 11i, HP OpenVMS I64 as well as various enterprise software designed specifically for IA64 chips. Once HP develops x86-64 version of its Unix and OpenVMS operating systems, there will be no need for Itanium.

KitGuru Says: Even though it is highly likely that “Kittson” chips will be released, it does not seem that Intel and HP actually want to invest R&D money in boosting performance of IA64 chips. As a result, it looks like the best thing “Kittson” will offer will be a 20 per cent performance improvement over current gen offerings.