ARM Holdings may be  accelerating its development cycles in a bid to offer better solutions for the booming market of smartphones and the emerging market of low-power servers, according to a high-tech analyst. Faster design cycles mean that ARM is making a step closer to Intel’s tick-tock cadence.

Technologies developed by ARM Holdings power the vast majority of smartphones and tablets in the world, but ARM itself has not developed a single system-on-chip (SoC) for any device. The company designs microprocessor architectures (e.g., ARMv7, ARMv8-A, ARMv8.1-A, etc.) and general-purpose processing cores (e.g., Cortex-A57, Cortex-A53, etc.) based on those architectures. Actual chip designers can license either an architecture to develop their own processing engines or Cortex cores to integrate them into their SoCs.

ARM’s clients, who develop their own cores, such as Apple or Qualcomm, introduce their applications processors on their own schedule that suits them and their customers. ARM’s partners, who license Cortex off-the-shelf building blocks they can integrate, get new cores once in roughly two years. For example, the ARM Cortex-A15 was introduced in September, 2010; the ARM Cortex-A57 was unveiled in October, 2012; and the Cortex-A72 was announced in February, 2015.

If ARM follows its traditional two-year cadence, then its next-generation code-named “Ares” processor should be announced sometimes in the second half of 2017. However, Linley Gwenapp, a renowned high-tech analyst from The Linley Group, believes that the “Ares” core “could reach smartphone and tablet makers by the end of next year,” reports IDG News Service. If this is the case and the information is correct, then ARM is evidently shrinking its design cycle from 2+ years to about 1.5 years.

“ARM is already well advanced on a next-generation high-end CPU that will follow the A72,” said Linley Gwenapp in a note for clients. “In fact, this project is so far along that the A72 team could ‘steal’ some portions of the next-generation design. For example, a new floating-point unit reduces latency by 33%. The prefetcher, also from the next-gen design, improves the data-cache hit rate to boost performance. The next-gen branch predictor reduces mispredictions by 20%.” 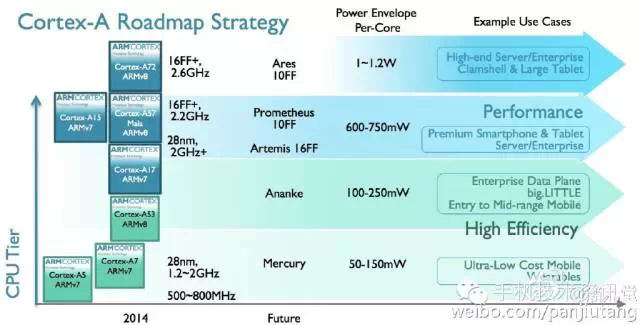 Not a lot of information is known about ARM’s new-high-end general-purpose cores. What we do know from a leak of an ARM’s roadmap is that the company is working on two high-performance designs code-named “Ares” and “Prometheus”, which are developed for 10nm Fin-FET process technology. It is highly likely that both are based on the ARMv8.1-A architecture, but this is not something officially confirmed by ARM. The code-named “Ares” cores with up to 1.2W thermal design power per core will be used inside application processors for high-end mobile devices as well as servers, whereas the “Prometheus” cores (with 0.75W TDP per core) are designed for premium smartphones and tablets.

It takes developers of application processors nine to twelve months to integrate ARM Cortex cores into their designs. Then it takes hardware makers another nine to twelve months to develop new devices powered by the new APs. As a result, we can expect the first devices with ARM Cortex-A72 inside in the second half of 2016, if everything goes well.

While shrinking core development cycle at ARM will not bring “Ares”- and “Prometheus”-based devices to the market earlier than in 2018, shortened development cycles in general mean that performance of mobile devices will increase at a faster pace, which is a good news. Besides, it means that ARM might get more competitive in servers. At the end, Intel improves performance of its Xeon server chips once a year and ARM’s partner need to offer a similar cadence in order to be more or less competitive.

It should be noted that shorter Cortex design cycles may not be a way to speed up introduction of new system-on-chips, but a mean to sustain current SoC development cycles in the FinFET era. It takes considerably longer time to design a chip with three-dimensional transistors than to create a processor with planar transistors. Therefore, ARM may just need to shrink its design cycles in order to enable its partners to roll-out new solutions every 12 to 18 months.

KitGuru Says: In order to be competitive with Intel, one has to do a lot of things. One of such things is a replication of the chip giant’s tick-tock cadence. With core design cycle shrunk to 1.5 years, ARM is getting closer to where it needs to be, however, it is still not quite there.