Der8auer, an overclocker from Germany, on Monday overclocked his Core i7-5960X microprocessor from 3.0GHz to 6065MHz, based on his submissions on Hwbot.org, a web-site that overclockers use to share their overclocking results. It is especially noteworthy that all eight cores and the Hyper-Threading technology remained active, as a result, the chip could demonstrate record performance in various applications.

To overclock the eight-core CPU, Der8auer used Gigabyte X99-SOC Force LN2 mainboard based on Intel X99 core-logic set as well as liquid nitrogen (LN2) cooling. The core voltage of the chip was increased to 1.657V, which is not too high. 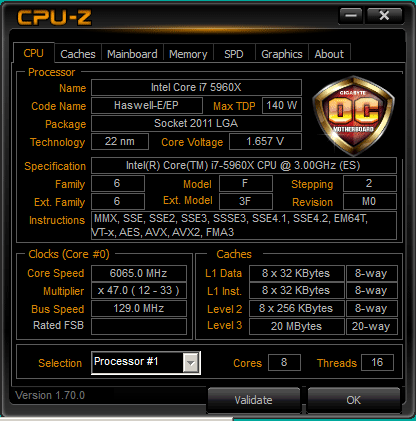 While 6GHz is extremely high clock-rate, it is not the record frequency ever set by the Core i7-5960X chip. Recently Nick Shih, a well-known professional overclocker that works with Asrock, managed to overclock his Intel Core i7-5960X processor to 6594MHz with LN2 cooling on Asrock X99 OC Formula mainboard. He had to increase core voltage to 1.818V and disable seven cores out of eight.

KitGuru Says: The new enthusiast-class processors from Intel overclock very well with LN2 cooling. Unfortunately, far not all of such chips can operate at 4.5GHz+ with proper air or liquid cooling.