Earlier this week Intel Corp.’s Core i7-4790K “Devil's Canyon” central processing units already demonstrated their impressive overclocking potential when overclocked by professionals with advanced cooling systems. As it turns out, the chip can work in overclocked state at 4.50GHz even with passive cooling.

At the Computex Taipei trade-show this week Intel demonstrated a passively cooled system with Intel Core i7-4790K “Devil’s Canyon” (4.0GHz default clock-rate, 4.40GHz maximum Turbo Boost frequency) inside. The processors worked without any problem when overclocked to 4.50GHz with all four cores and the HyperThreading enabled during demonstrations, reports SweClockers.

While it is obvious that the demonstrations were not run non-stop for hours, it is still remarkable that the chip could handle the 4.50GHz clock-rate without throttling while being cooled passively. 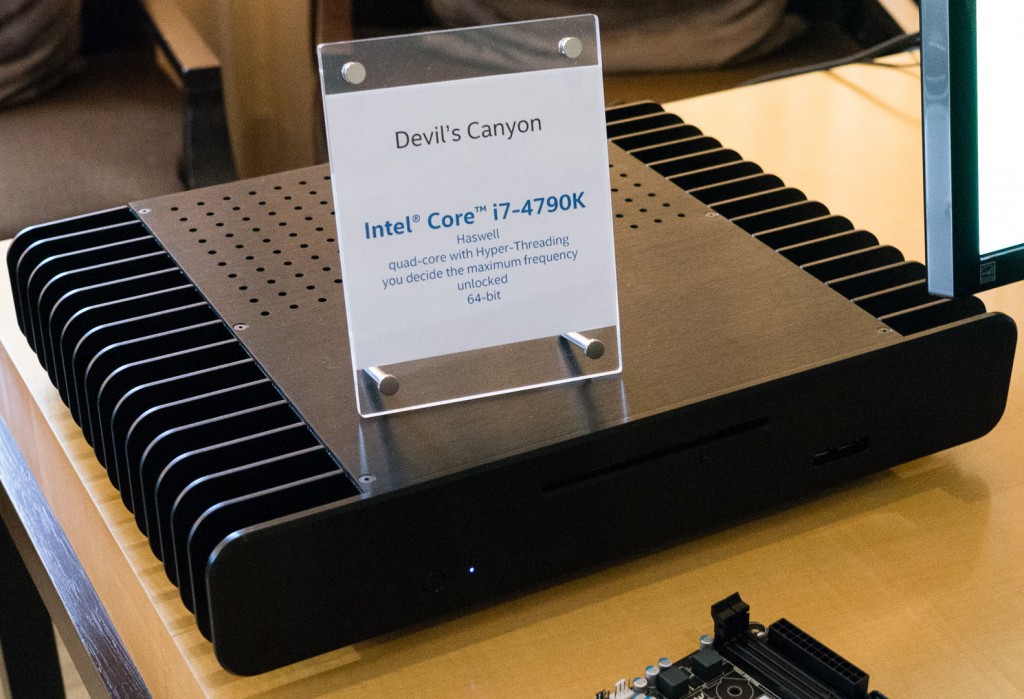 At present boutique PC makers sell factory-overclocked personal computers with the Core i7-4770K processors inside that are clocked at 4.20GHz – 4.40GHz and are cooled-down using closed-loop liquid-cooling solutions.

If commercial versions of the i7-4790K behave the same way as the samples that Intel demonstrated at Computex do, it looks like high-end PC makers will offer rather interesting solutions featuring the “Devil’s Canyon” microprocessors later this summer.

KitGuru Says: Keep in mind that the passive cooling in general heavily depends on environmental temperatures, hence it is not really suitable for any serious overclocking. The fact that Intel could show a chip capable of running at 4.50GHz inside a special fanless case that acts like a huge cooler itself does not mean that you should try something like this at home. What Intel wanted to show with the demonstration is that the new “Devil’s Canyon” CPUs are good overclockers in general.