A well-known enthusiast has managed to overclock an engineering sample of the yet-unreleased Intel Core i7-5960X microprocessor code-named “Haswell-E” to rather whopping 6.25GHz. While it is hard to make conclusions regarding overclockability of Intel’s upcoming top-of-the-range chip, the early result still seems to be interesting.

TaPaKaH, a well-known overclocker from Russia, has managed to push an engineering sample of the Intel Core i7-5960X processor to 6253.16MHz (up from 3.0/3.50GHz default frequencies), according to a listing at CPU-Z. The result was achieved on a system featuring MicroStar International’s MSI X99 SLI Plus (MS-7885) mainboard and quad-channel DDR4 memory kit. For some reason, the overclocker used a 32-bit Windows XP SP3 operating system, hence, naturally, there were issues with correct recognition of DDR4 memory modules.

In order to boost clock-speed of the Core i7-5960X “Haswell-E” microprocessor to whopping 6.25GHz, the overclocker had to disable six out of eight cores (as well as the Hyper-Threading technology), increase the core voltage (Vcore) to 1.753V and also (presumably) use liquid nitrogen (LN2) cooling. 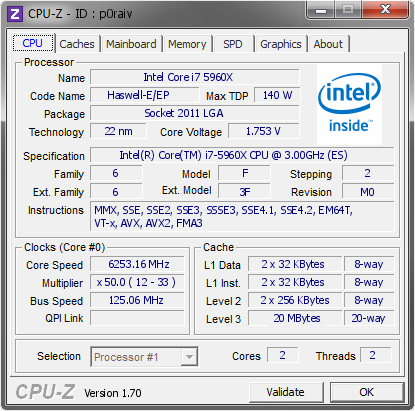 Even though 6.25GHz clock-rate is a nice result that shows good overclocking potential of the “Haswell-E” in general, it has little practical meaning since only two cores were enabled.

Meanwhile, a member of Coolaler forums has managed to overclock the Core i7-5960X “Haswell-E” microprocessor with all eight cores with HT activated to 4.0GHz with 1.046V Vcore. The overclock was not only validated by CPU-Z, but the chip managed to complete the SuperPi 1M benchmark in 14.555s. Most probably the “Haswell-E” could do even better than that with higher voltage and better cooling

KitGuru Says: It is only one day left before reviews of the Intel Core i7-5960X “Haswell-E” microprocessors are set to hit the web. What we do know already is that the new chips should not only offer rather high performance out-of-the-box (which is expected), but also great overclockability.