Intel Corp. has decided to speed up the introduction of its next-generation Core i7 5800/5900-series “Haswell-E” microprocessors by several days or weeks and introduce the new chips already in August. This should give Intel and its partners several additional days of sales and therefore additional revenue, but it will not impact the market.

SweClockers reports that Intel intends to formally unwrap its “Haswell-E” central processing units on the 29th of August, instead of mid-September, as reported several months ago. It is unknown why Intel decided to speed up the launch, but it means that both new processors as well as systems on their base will become available slightly earlier than expected.

Given the fact that Intel’s high-end desktop (HEDT) extreme processors do not have any competitors on the market, it does not really matter when they are released. The demand for Intel’s “Haswell-E” chips will be relatively low, given their price, but all enthusiasts seeking for high-performance systems will clearly be looking at the new Core i7 Extreme-series microprocessors. 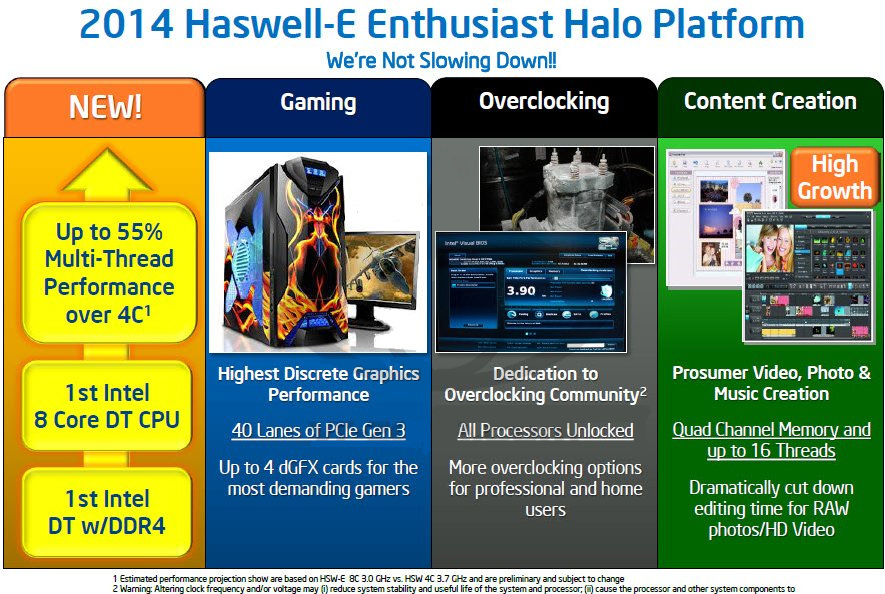 As previously reported, the new Intel Core i7 HEDT family of processors will include three models: the Core i7-5960X, the Core i7-5930K and the Core i7-5820K. Intel’s Core i7-5960X processor will be the company’s first desktop chip with eight cores with the Hyper-Threading technology. The new top-of-the-range Extreme-series microprocessor also features 20MB L3 cache, quad-channel DDR4 memory controller (2133MHz maximum clock-rate) and 40 PCI Express 3.0 lanes in total. Since the chip sports eight cores with the HT tech, it will have 3.0GHz default clock-rate. The upcoming central processing units will be made using 22nm process technology and will be based on the Haswell micro-architecture.

KitGuru Says: Early launch is always good since it usually means that the company can supply enough microprocessors. It will be particularly interesting to learn how good will the Core i7-5960X chip with eight cores overclock. As reported, that CPU actually has twelve x86 cores inside, but four cores are disabled. How will this affect its overclocking potential? We do not know for sure…