After plenty of speculation, Lisa Su today officially announced AMD's Ryzen 5000 mobile processors at CES 2021. These new mobile parts are split between the more performant H-series and the lower-power U-series, scaling up to 8-core/16-thread parts that can push past a 45W TDP. 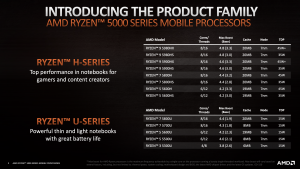 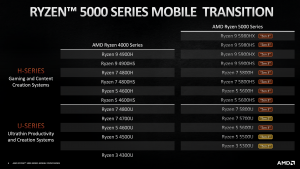 We've been hearing about Ryzen 5000 for mobile since before the Zen 3 architecture debuted last November, but it is now finally here. AMD announced eight H-series parts and five U-series parts, slotting into the familiar Ryzen 3, Ryzen 5, Ryzen 7 or Ryzen 9 naming conventions. For a very high level overview, all of the H-series parts are either 6C/12T or 8C/16T, with TDPs of at least 35W. The U-series parts range between 4C/8T to 8C/16T, but all are 15W parts.

As a curiosity, not all of the parts shown above are built on the Zen 3 architecture – all except the low-power Ryzen 3 5300U, Ryzen 5 5500U and the Ryzen 7 5700U, which remain on Zen 2. That means of the new U-series chips, only the Ryzen 5 5600U and Ryzen 7 5800U are Zen 3-based. A tell-tale sign for this point is the significantly higher cache capacity enjoyed by the Zen 3 options as compared to the Zen 2 parts. 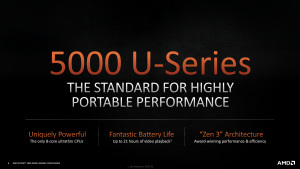 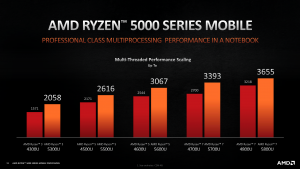 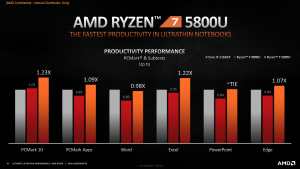 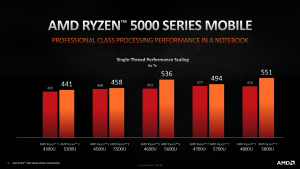 That oddity seems to affect single-threaded performance most of all, as AMD's data shows increases of just 2-4% for the 5300U, 5500U and 5700U compared to their predecessors when looking at Cinebench R20. The Zen 3-based 5600U and 5800U, meanwhile, scored 18% and 16% better than their predecessors, respectively. 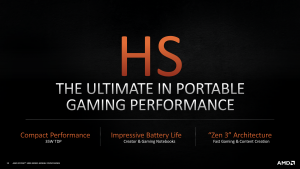 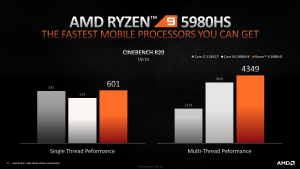 For its higher power H-series, AMD has introduced a fair few more parts than was present with the previous generation, and there are new suffixes too, like the HX SKUs. It has the potential to get confusing, but every H-series SKU announced so far is built on the same 7nm process, Zen 3 architecture, and supports SMT. The main differences, aside from some being 6-core and others 8-core, come down to clocks and TDP. Every HS part has a lower TDP of 35W, and accordingly drops rated clock speed by up to 400MHz, though this varies from SKU to SKU. 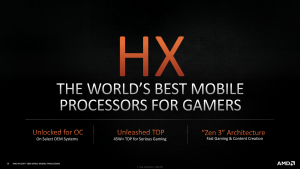 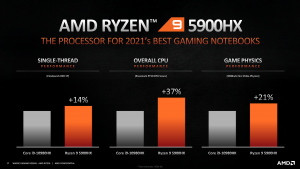 As for the HX parts, this denotes a part can be overclocked, raising the TDP beyond 45W, depending on the system of course. The real-world difference between the 5900HX and the 5980HX, which are both 8C/16T parts, both overclockable, with the latter enjoying just a 200MHz rated boost clock advantage – remains to be seen.

Regardless, AMD clearly has confidence in its new parts, showing both the 35W Ryzen 9 5980HS and the 45W+ 5900HX out-scoring Intel's i9-10980HK in a few different workloads. Availability of Ryzen 5000-based mobile machines is slated for February.

KitGuru says: Ryzen 5000 for mobile is finally here, and there's more SKUs than I expected. What do you make of these new parts?