Overclocking and tuning your system can be great fun and is very rewarding when you see the results of your work pay off in benchmarks and real-world performance gains. While most of us overlock our systems at home as a hobby and to extract a few more FPS in games, there are some individuals that take it far more seriously.

One of those individuals is a professional overclocker who goes by the name of Splave. Just recently Splave, with the help of the ASRock TRX40 Taichi motherboard and an AMD Ryzen Threadripper 3990X CPU, managed to break five world records including the highest recorded operating frequency of a Threadriper 3990X CPU at 5748.66MHz, a seriously impressive achievement.

As well as recording the highest ever CPU frequency for a Threadripper 3990X CPU, Splave also broke numerous benchmark records such as the wPrime 1024m benchmark. With the CPU frequency clocked at 5400MHz, Splave broke the 12-second barrier by recording a time of just 11sec 541ms which set a new world record. 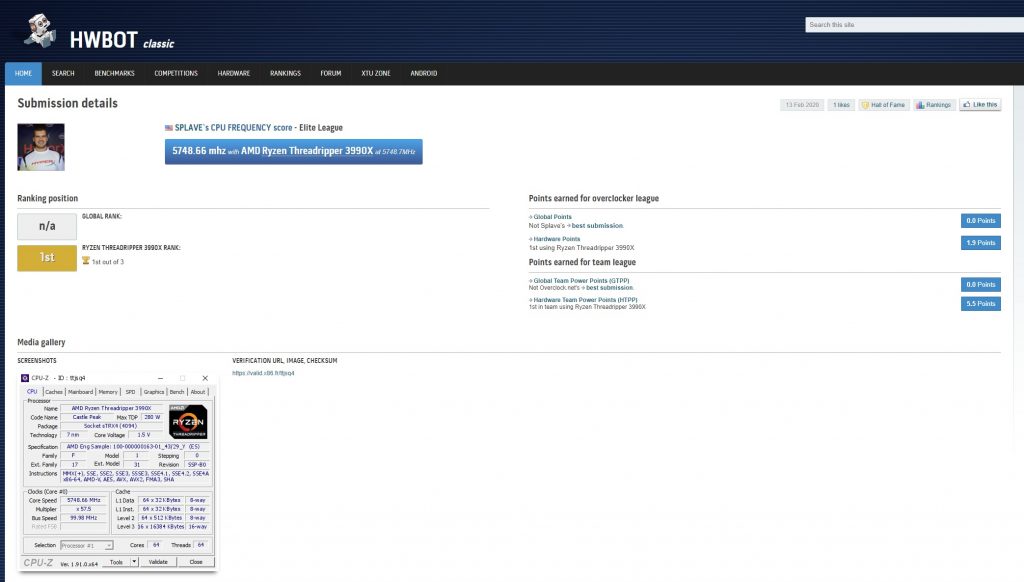 Splave also broke other records including the GPUPI – 1B benchmark record in a completion time of 21.622 seconds, a new Cinebench R20 multithreaded world record of 39518 points was set, as well as a breaking the record for Geekbench 3 Multi-Core score of 293,771 points and a HWBOT X265 Benchmark at 1080p, recording an average FPS score of 384.389 FPS. All the records were validated with HWBOT and can be found on the ASRock website.

Not only does this world record-breaking achievement prove that the AMD Ryzen Threadripper is one of the most powerful desktop CPUs available, it also shows that the ASRock TRX40 Taichi platform is a must-have for overclocking and achieving maximum performance with its 16 Digi Phase, 90A Dr. MOS power delivery solution providing smooth and stable power to the CPU, even under extreme scenarios.

KitGuru says: Overclocking desktop CPUs has become very simple in recent years with many CPUs and motherboards designed for the job. If you have thought about getting into overlocking to extract a bit more performance from your desktop CPU, there are plenty of guides out there to help. It’s really not that difficult, give it a go!