Intel Alder Lake CPUs to bring up to 20% IPC increase

We are still quite far away from the launch of Intel Alder Lake CPUs, but early leaks keep coming. The latest leak comes from an alleged Intel presentation slide, detailing that Alder Lake CPU cores will feature a “20% single-threaded uplift” in performance compared to some previous architectures. Alder Lake also apparently boasts double the multi-thread performance of Tiger Lake-U.

Intel Rocket Lake-S is just around the corner, but the company still has another desktop processor architecture coming out later this year. Intel Alder Lake is Intel's upcoming hybrid architecture with high-performance cores (Golden Cove) and high-efficiency cores (Gracemont), supporting DDR5 and PCIe 5.0. Based on the LGA 1700 platform, Intel Alder Lake's entry-level Core-i3 should feature a 4/6+0 core configuration, while Core-i5 and Core-i7 SKUs are expected to vary between 6+0 and 8+8, with up to 125W TDP. 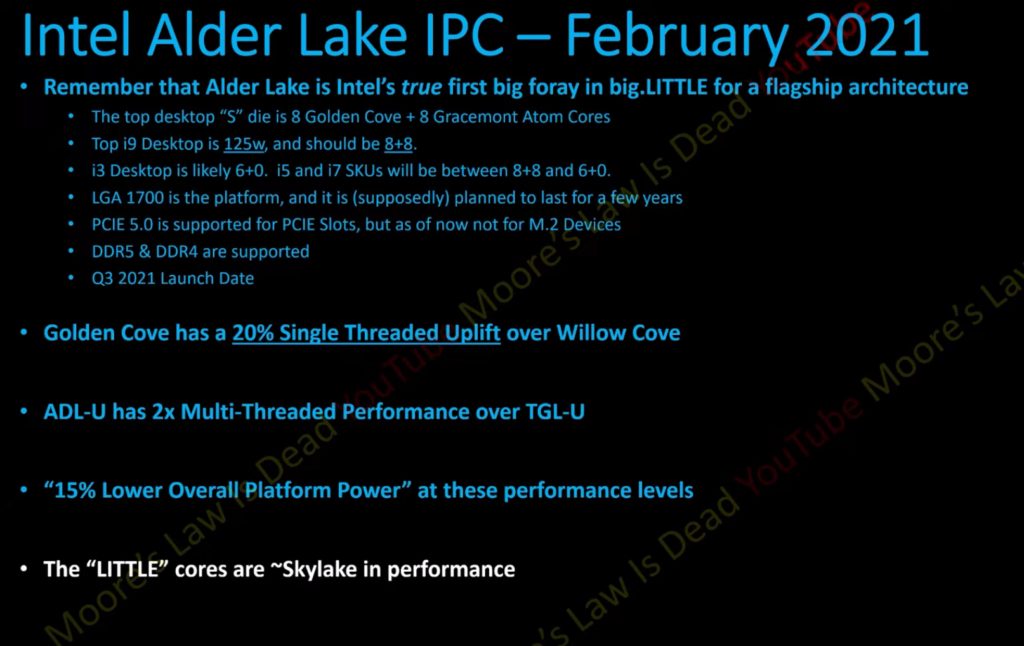 Based on current rumours about Alder Lake, it's still hard to grasp what level of performance it will provide, but Moore's Law Is Dead's latest video shares some new figures about the upcoming “big.LITTLE” architecture. According to its sources, Golden Coven cores will come with a “20% single-threaded uplift” over Willow Cove cores, allowing Intel to keep the single-core performance crown for the time being. Moreover, the high-efficiency Gracemont cores should be roughly on par with a Skylake core.

Intel Alder Lake processors are scheduled to release in the second half of 2021.

KitGuru says: Intel Alder Lake is shaping up to be an interesting launch, particularly with its “unusual” core configuration. Are any of you planning on upgrading this year?