Screenshots of a CPU-Z instance showing an Intel Core i9-10990XE have emerged on the Chiphell forum. If Intel does indeed launch this CPU, it will become the latest flagship HEDT CPU from the company, replacing the current i9-10980XE with an increased core count and higher clocks. Like any other rumour, this should be taken with a grain of salt.

All of this together allegedly achieved a score of 14005 on Cinebench R20, which is around the same level as the AMD Ryzen Threadripper 3960X. 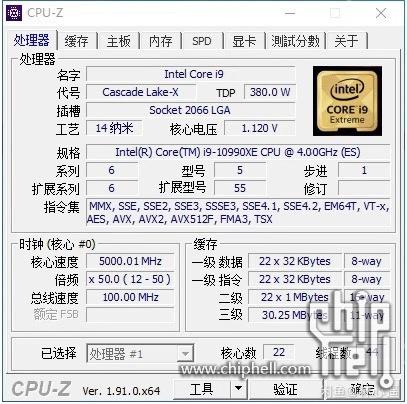 It also lists a core voltage of 1.12V, which does seem somewhat ‘interesting’ given the very high 380W TDP shown in the CPU-Z screenshot. This may well be the highest rated TDP in a CPU we’ve seen, coming in above the 280W TDP of the 64C/128T AMD Ryzen Threadripper 3990X.