Every AMD Ryzen CPU will have an unlocked multiplier

AMD has confirmed with some slide releases that the next-generation CPUs it will be releasing as part of its Ryzen range, will have fully unlocked multipliers. That’s not a restriction to high-end chips either: every single Ryzen CPU will be ‘unlocked,’ meaning every chip can be overclocked very easily.

While once upon a time overclocking was a lucky extra that some CPUs were more capable of than others, somewhere along the way Intel decided it could use overclocking ability as a selling point, so it only unlocked the multiplier on some of its chips. That’s not a tactic AMD plans to use with its Ryzen chips though.

Of course you will still need a decent motherboard with the right features (x370, x300 and B350 chipsets only) and enough stability to make it work – as with any overclock – but you won’t need a specialist CPU. You also don’t need fancy memory either, as one of the advantages of multiplier overclocking is that it affects the CPU only. 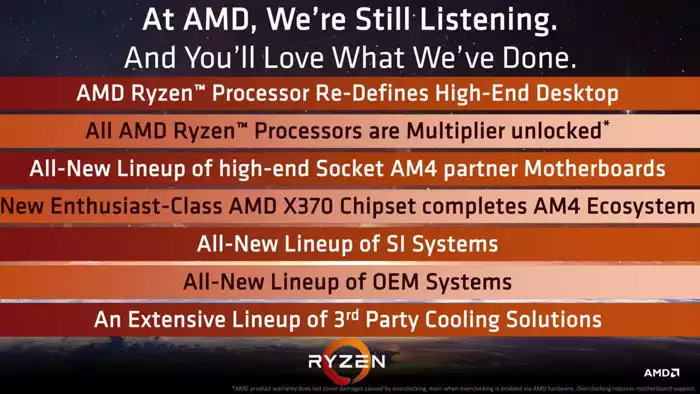 Ryzen owners may not even need to do any overclocking themselves, as AMD’s Extended Frequency Range could see chips automatically overclocked to their full potential when needed.

Also detailed in Infoworld’s break down of the new chips, was that if you are looking to run crossfire or SLI setups on a Ryzen platform, you will need an X370 motherboard. The other chipsets will not support it. According to AMD, that’s because only those who buy top end motherboards tend to use multi-GPU set ups anyway, so adding support for that to entry level models wasn’t seen as a necessity.

KitGuru Says: It’s good to see AMD not putting limiters on the performance potential for its chips and forcing people to pay for the privilege of overclocking. Just make sure you get a compatible motherboard if you’re looking to get into it yourself.