AMD is set to take on Intel once again this year with the launch of its highly anticipated Zen architecture processors. While Socket AM4 is currently poised to launch for some APUs fairly early this year, Zen CPUs won't be arriving until a bit later, with current sources pointing towards an October launch date.

According to a source supposedly close with AMD, (via wccftech), the first Zen/Summit Ridge processor will be an eight-core offering, with dies already taped out and currently being validated through testing. A release is then apparently scheduled for October. 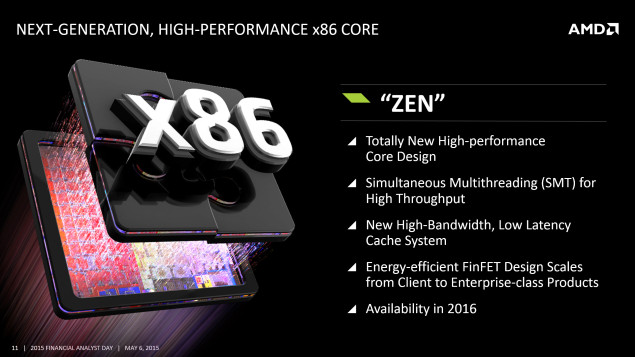 The report also notes that the future Socket AM4 CPU will have a 95W TDP, putting it in-line with Intel's current high-performance mainstream desktop processors in terms of power consumption.

As always when dealing with unofficial information, it is important to note that plans could change and delays could happen. This is also an anonymous source so do take it with a grain of salt. That said, We have been expecting a late 2016 release and an October date would fit that bracket.

KitGuru Says: AMD is finally gearing up to launch the Zen architecture alongside a new ‘unified' AM4 platform that will support both APUs and new CPUs. Are any of you currently waiting on Zen?