Back at CES, AMD promised to ‘push the envelope' of high performance computing once again in 2020 and so far, the company is off to a very good start. Today, the Ryzen 9 3990X officially launches, bringing a whopping 64-cores and 128 threads to desktop platforms.

We have been fortunate enough to get our hands on this processor already and better yet, we have a full review up HERE. Throughout our testing, we were consistently impressed by the TR 3990X, as reflected by the well deserved ‘Must Have' award. 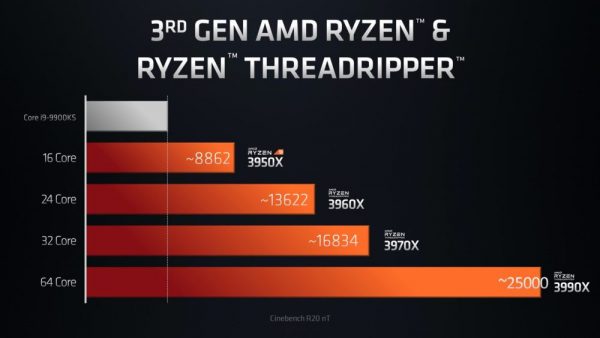 If you have the money to spend, then you can already pick up the Ryzen Threadripper 3990X here in the UK, with Overclockers UK selling it for £3,689.99. Meanwhile over in the US, the CPU carries an MSRP of $3990.

KitGuru Says: I've been reading up on the reviews for the TR 3990X this afternoon and it is certainly impressive. What do you all think of AMD's latest and greatest? Are any of you thinking about getting one?

Previous EA increases the prices of its games on Steam; Origin prices remain unchanged
Next Multiple remasters and reimagined titles are set to be announced by Activision Blizzard this year