Earlier this week, rumours began circulating suggesting that Intel is due to release a BIOS update in order to block BCLK overclocking on locked (non-K) Skylake processors. Now, it seems like that is what is happening as ASRock is the first motherboard maker to come out with a new BIOS update, which does disable the function.

This BIOS update was released for a range of ASRock motherboards. In the description, we can see that two key changes were made, the first being an update to CPU microcode to 0x76 and the second update is the removal of SKY OC, a feature used to overclock non-K series Skylake processors. 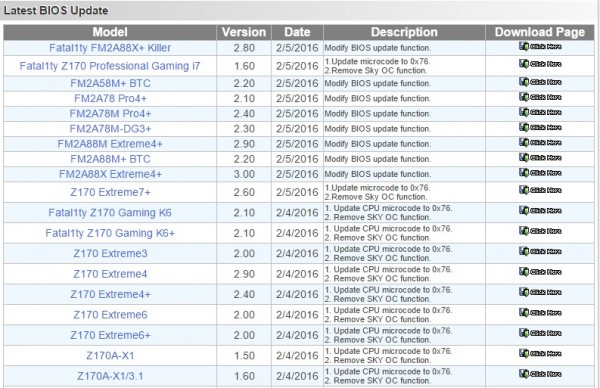 We will likely see other motherboard makers follow suit with updates to disable BCLK overclocking on locked Skylake chips. Most of ASRock's boards have the update available now but there might still be a few left over, as we can see, the Fatal1ty FM2A88x+ Killer board only got the update today.

KitGuru Says: When we originally reported that Intel might be blocking BCLK overclocking on non-K Skylake processors, a lot of our readers seemed disappointed in the decision. Did any of you actually try out this overclocking method? Did it cause any issues at all?