The long list includes a listing of 45 Xeon processors, including 11 Xeon Phi MIC-architecture co-processing units. The Xeon CPUs proper, though, range from the high-end Xeon Platinum 8180 CPU (containing 28 CPU cores / 56 threads, running at 2.5 GHz and sporting a total cache of 38.5 MB), down to the Xeon Gold 5122, rumoured to have 12 cores and 24 threads. The new Skylake-SP (or EP, depending on who you ask), are reported to contain 1MB of L2 cache per core. 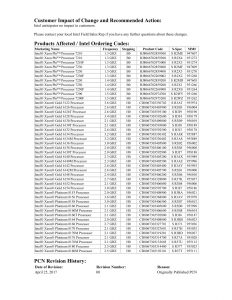 Purley, Intel’s new server platform, which uses yet another socket (LGA 3647), has been scheduled for a Q2 release for a while, and taking into consideration the type of CPUs this PCN discloses, this is clearly aimed at the datacenter / HPC segment which AMD Naples will eventually come to, rather than Ryzen or any other HEDT SKU. No conspiracy theories there.

While Intel has not yet officially announced the CPUs, some stores are already listing them – no technical details, but pricing available. The Xeon Platinum 8180 costs a whopping £9600, while the ‘M’ variant, costs north of £12500. The cheapest CPU on the list, the 3.6GHz Xeon Gold 5122 costs over £1150.

KitGuru Says: Skylake EP/SP is on the verge of hitting the market as planned. AMD has nothing yet to fight it off, and it has been notoriously quiet on the Naples front.

Back in February ahead of the launch of the RTX 3060, Nvidia announced its new anti-mining measures to make GeForce graphics cards less desirable to crypto mining farms. We've heard through leaks and rumours that this tech would eventually transition over to the rest of the RTX 30 series line-up and today, Nvidia is making that official.