One of the main advantages of the FreeSync technology that Advanced Micro Devices has been communicating for many months now is the fact that since FreeSync is based on open-standards and does not require custom hardware, monitors supporting the feature will not be too expensive. According to a new claim by AMD, when compared to displays featuring Nvidia Corp.’s G-Sync, FreeSync-enabled screens should cost more than $100 less.

Richard Huddy, gaming scientist at AMD, revealed at PDXLAN event this week that monitors featuring AMD’s FreeSync will ship in December, just like AMD’s drivers that support the technology, reports Legit Reviews. Theoretically, the first displays with AMD FreeSync technology can even make it to the market this December, but only in select regions and only in limited quantities. Expect mass availability of the first monitors with FreeSync in early 2015; wide availability of displays supporting the technology is still six months away, according to AMD. 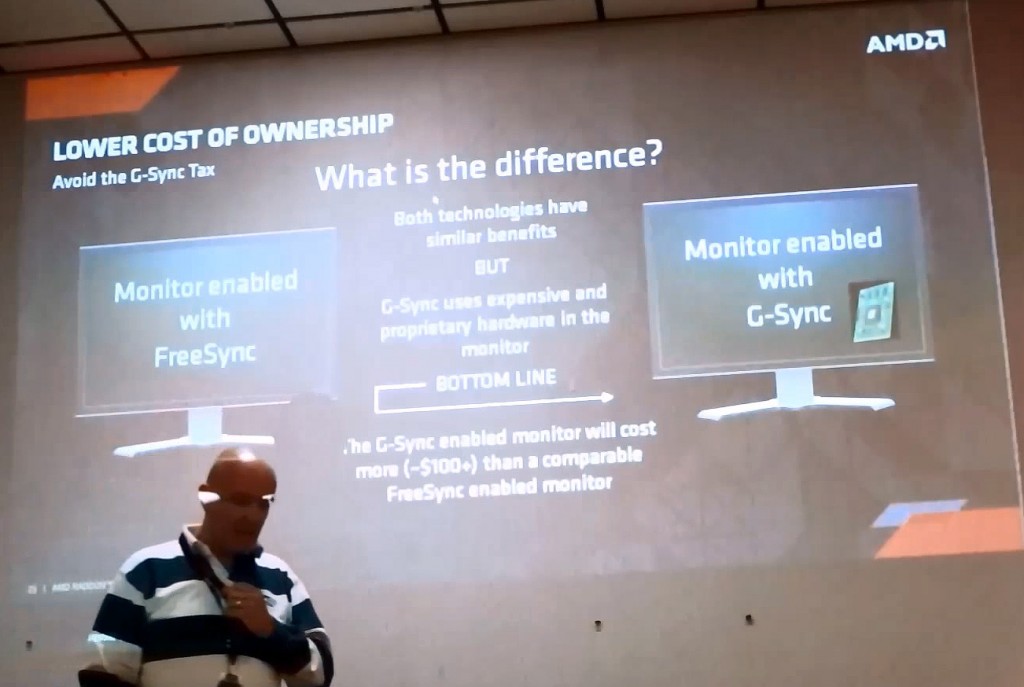 VESA’s Adaptive Sync and AMD’s FreeSync technologies enable the display to dynamically match a GPU’s rendering rate, on a frame-by-frame basis, to produce a smoother, low latency, gaming or movie watching experience. This year the Adaptive Sync technology was incorporated into the DisplayPort 1.2a specification (previously it was a part of the eDP standard). To build monitors supporting Adaptive Sync and FreeSync technologies special display scaler chips are required. Major makers of scalers plan to start shipments of FreeSync-supporting chips in Q1 2015.

To enable displays that support Nvidia’s proprietary G-Sync technology, the graphics chip designer sells a special scaler to display makers. Since the solution is custom-built, it naturally is pretty expensive, which is why monitors supporting G-Sync are not really affordable (at least when their specifications are kept in mind). By contrast, AMD FreeSync-enabled displays should feature new industry-standard components, which will make them more than $100 cheaper compared to devices featuring Nvidia G-Sync.

KitGuru Says: It is interesting to note that AMD still does not talk about VESA’s Adaptive Sync technology, which should basically be free as it is a part of the DP 1.2a standard. In fact, if AMD and Nvidia supported Adaptive Sync, virtually all decent displays would enable tear- and lag-free gaming in a couple of years from now for absolutely free.

Previous Another round of Radeon R9 290 price-drops may be incoming
Next Ubisoft accuses AMD of Assassin’s Creed Unity’s poor performance, bugs