Asustek Computer is working on a new Nvidia GeForce GTX 980 Ti-based graphics card that promises to offer no-compromise performance. The new adapter is based on Asus’ own design and will feature increased clock-rates and an advanced cooling system. The board is demonstrated at Computex in Taipei, Taiwan.

The Asus Strix GTX 980 Ti will utilize a highly-custom printed circuit board developed by Asustek Computer in-house that will feature enhanced multi-phase voltage regulation module for the GPU and memory designed to ensure maximum stability and overclockability. Default clock-rates of the graphics card will likely be increased by 10 – 15 per cent compared to Nvidia’s recommended frequencies.

The Strix GeForce GTX 980 Ti will also use all-new DirectCU III cooling system with three 10cm fans and 10mm copper heat-pipes to ensure low temperatures and headroom for further overclocking. The fans automatically shut down when the GPU is under light load. 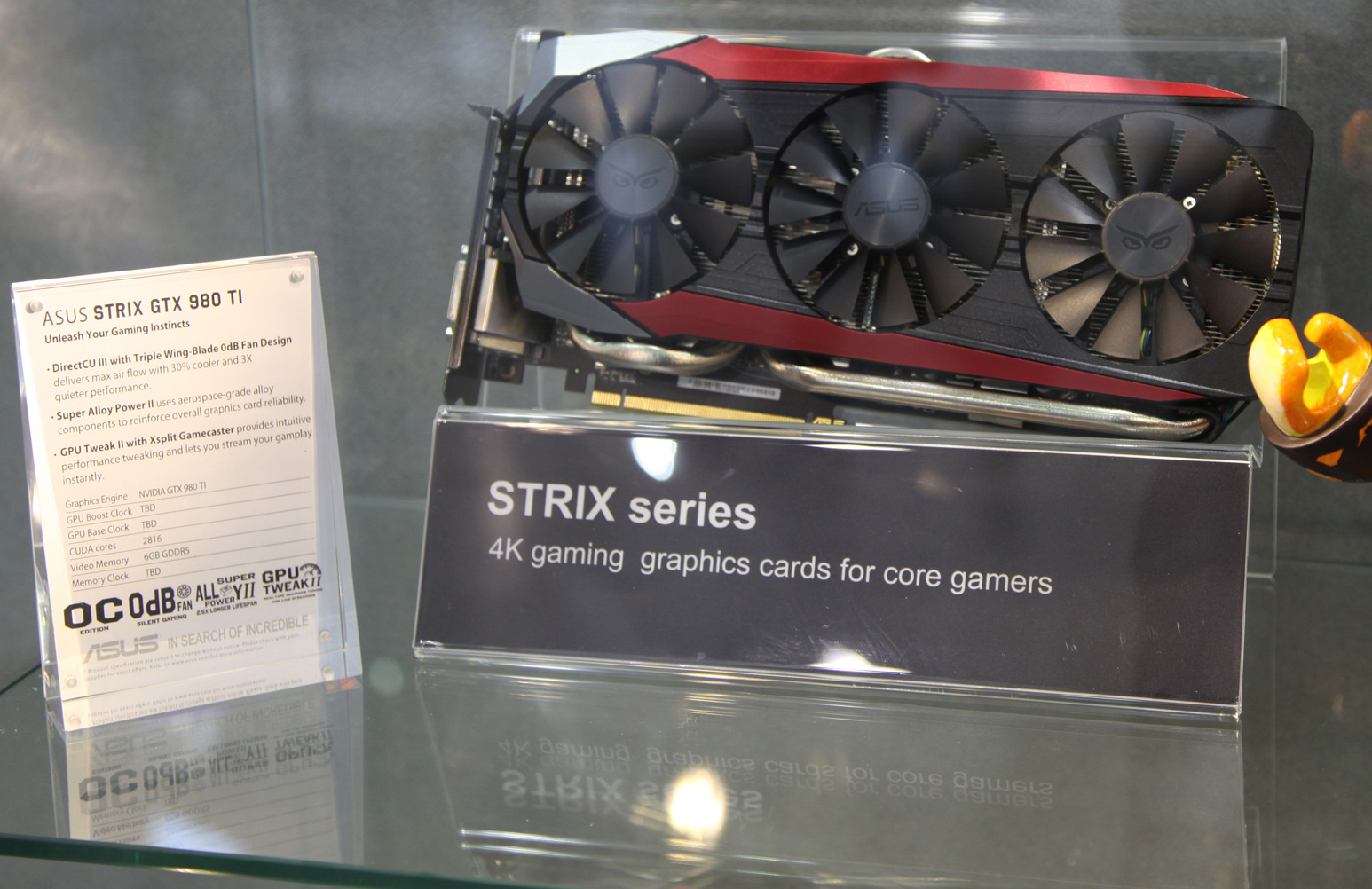 Asustek’s Strix-series products are designed for gamers and deliver considerably higher performance compared to devices based on reference designs. However, Strix products are not Asus’ top-of-the-range offerings. It is possible that eventually Asus will release GeForce GTX 980 Ti-based graphics adapter that will be a part of the ROG Matrix Platinum family, which is designed to provide absolutely best levels of performance and overclockability. Asus GTX 980 Ti ROG Matrix Platinum could feature 14-phase VRM, various tweaks for extreme overclocking and other advantages.

The Asus Strix GTX 980 Ti will likely hit the market in late July or early August. Pricing is unknown, but naturally it will be higher than default $649/£550/€749. The hypothetical Asus GTX 980 Ti ROG Matrix Platinum could be launched this fall.

KitGuru Says: It will be tremendously interesting to see what professional overclockers will be able to do with custom GeForce GTX 980 Ti graphics cards by companies like Asus or EVGA. Chances are that those products could set more performance records than even Nvidia’s flagship GeForce GTX Titan X.