Modern graphics processing units are extremely complex devices, which are exceptionally hard to manufacture. Because some of their execution units are defective, they are usually disabled during testing and packaging process. However, in many cases GPU developers also disable fully-functional units just to get a GPU configured for a particular graphics card. In some cases, such units can be re-activated and a new set of utilities may help to do it.

CUInfo, a new software utility developed by tx12, a computer graphics enthusiast from Overclock.net forums, can be used to read information about active and disabled compute units (CUs) units in AMD “Hawaii”, “Tonga” and “Fiji” graphics processing unit. The utility scans GPUs and determines which compute units within the shader engines are fully-functional (marked as “.”), which are hardware locked (marked at “x”) and which are software locked (marked at “o”). The tool can be downloaded here. For example, the result obtained on the Radeon R9 390 with disabled SPs looks as follows:

According to the developer, if just one compute unit (or just one stream processor within the unit) fails, the chip gets cut down to a lower-graded model by disabling a number of “lowest” CUs in the shader engine (see block diagram of a cut-down AMD’s “Fiji” below). Lower-graded models can have performance up to 25 per cent lower compared to fully-fledged models. However, in some cases, the chip may be fully-functional, but since GPU developer needs to sell more affordable models, it simply disables “lowest” CUs by either blocking them in BIOS or using different methods. 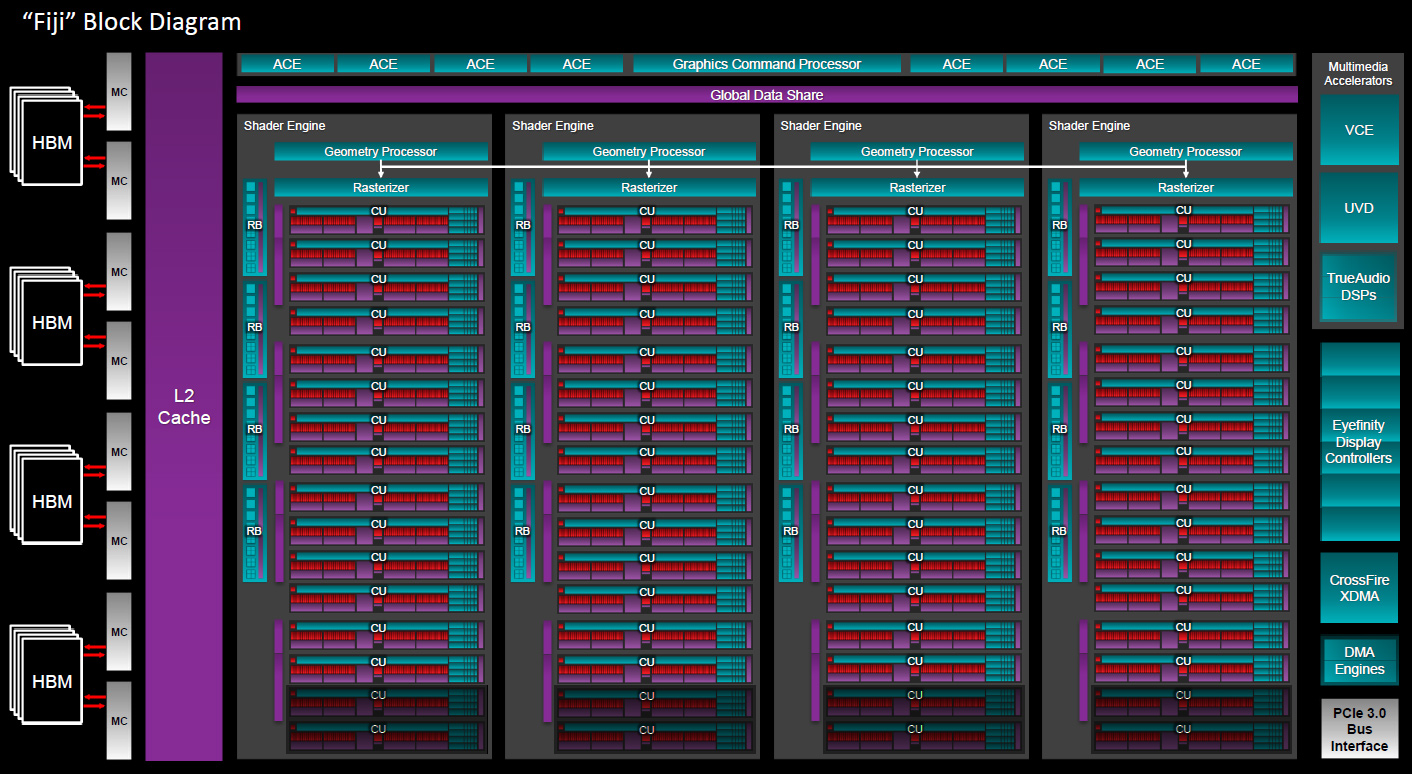 In many cases it is possible to re-enabled fully-functional CUs if they were not physically cut-off using a laser, for which tx12 proposes to use his AtomTool utility, which generates new BIOS versions for graphics cards. The tool is available here.

Far not all AMD Radeon R9 Fury can become fully-fledged Radeon R9 Fury X with 4096 stream processors. Some GPUs only feature 3840 SPs because the rest are physically disabled.

DISCLAIMER: KitGuru does not recommend to re-flash BIOS of your graphics card and re-enable units, which may potentially be faulty. Backup your BIOS before proceeding and use the utilities at your own risk.

KitGuru Says: Binning is a costly process, which is why in many cases lower-grade GPUs feature considerably lower amount of execution units compared to fully-fledged graphics processors. This saves a lot of time and money. Given the fact that with initial batch of wafers GPU vendors have no idea about actual yields, they only physically disable faulty CUs when they initially examine the uncut chips on the wafers. Once they determine the lowest possible specification that provides decent performance and is easy to get, they disable “unnecessary” units in chips that have defects (or do not have defects) using BIOS or software. Eventually, GPU developers disable the right amount of compute units already during initial examination physically, which is why it gets impossible to re-enable them.

Previous RIAA throws down piracy gauntlet at feet of BitTorrent Inc.
Next EFF and others call for new Do Not Track standard