Nvidia drops prices of GeForce GTX 980, GTX 980 Ti. But not for Europe

In an unexpected move, Nvidia Corp. reconsidered recommended pricing of its graphics cards following the introduction of its GeForce GTX 980 Ti early on Monday. Unfortunately, the GeForce GTX 980 Ti will be considerably more expensive in Europe than in the U.S.

The reason why Nvidia decided to set the price of its new GeForce GTX 980 Ti so high in Europe is completely unclear. The price of Nvidia’s single-chip flagship – GeForce GTX Titan X – has been declining and gamers with unlimited budgets will prefer to get the top-of-the-range solution even though it is more expensive. 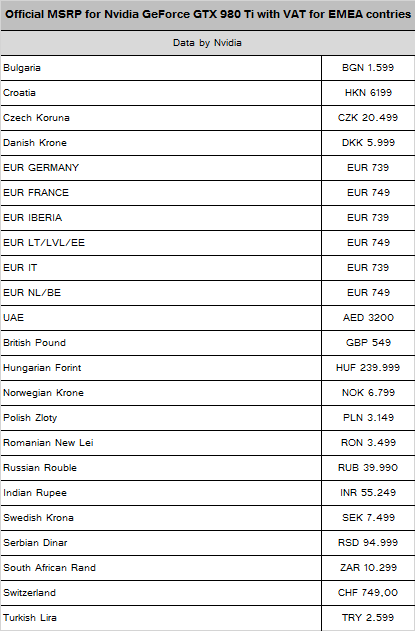 KitGuru Says: Nvidia’s prices for Europe continue to disappoint. First, Nvidia made its GeForce GTX Titan X considerably more expensive in the European Union compared to the U.S. This time the price of the GeForce GTX 980 Ti in some European countries is nearly $200 higher compared to the MSRP of the product in the United States.