According to a study made by Jon Peddie Research (JPR), AMD has shipped 553 million GPUs since 2013, with discrete graphics cards accounting for 36% of this figure.

To make things clear, let's first establish what exactly JPR was looking at within its study – since GPU can refer to quite a wide range of products. Crucially, the study is reporting sales of both integrated GPUs as well as discrete cards, and combining them for a total figure.

When looking solely at integrated GPUs, however, Intel comes out on top for global shipments, but when solely counting discrete cards, Nvidia leads the market. It is when combining the numbers for total shipments of integrated and discrete graphics that AMD takes the lead, and it's reported that the company succeeded in shipping more than half a billion units since 2013. 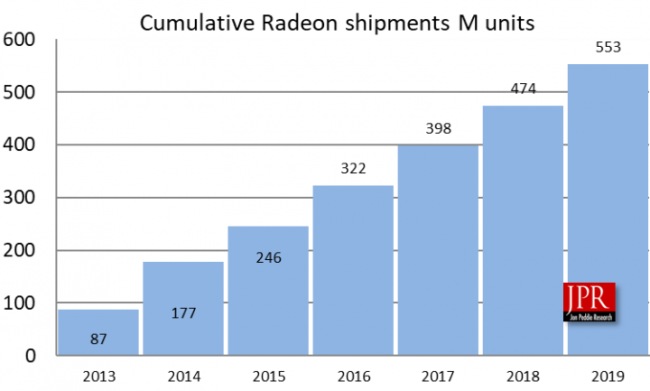 One contributing factor for this achievement is undoubtedly AMD providing hardware for “the Xbox and the PlayStation console projects”. It is also expected that AMD will provide chips to be used in Samsung's smartphones starting from next year, and that will result in further growth of its GPU sales figures.

The full report can be found HERE.

KitGuru says: What do you make of this news – and what can we expect from AMD in years to come?