Nvidia is investigating the cause of RTX failures while offering replacements

At the end of last month, Nvidia saw a notable number of defective RTX cards after users flooded various forums to complain. Fortunately, Team Green is on the case and acknowledges that it is ready to help those suffering from issues.

Nvidia took to its GeForce Community to unveil that “limited test escapes from early boards caused the issues some customers have experienced with RTX 2080 Ti Founders Edition.” While this doesn’t divulge the exact root of the issue, the firm believes that early adopters are the only ones to be affected due to a slip in quality control. 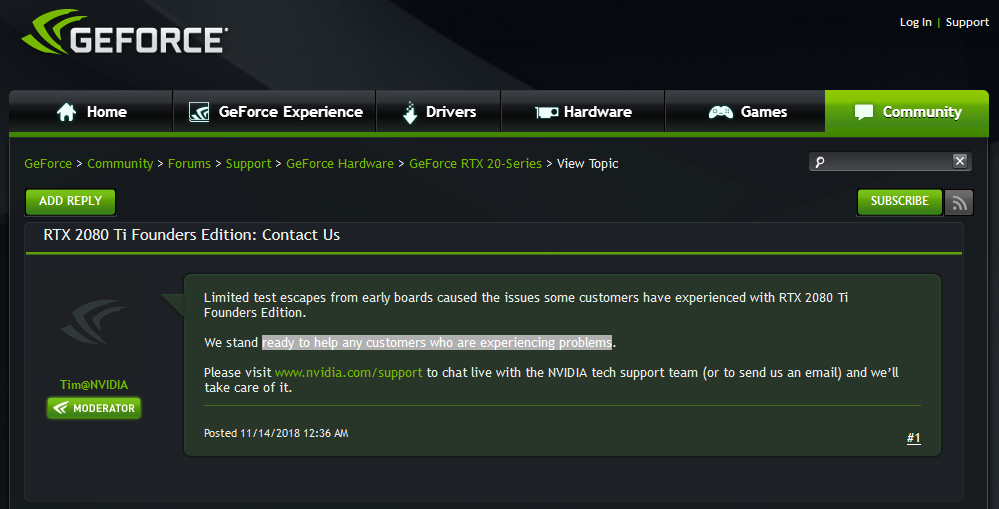 Although there were a number of cards from different manufacturers, users quickly identified that the problem primarily affected those using an RTX 2080 Ti Founders Edition. Nvidia’s Founders Edition cards are in production long before aftermarket variants, meaning it is entirely possible that test models somehow made their way into the wild.

The company is keeping hush on exactly how many people have endured the issues, and it remains unclear whether or not Nvidia has truly nipped it in the bud. Reports still speculate that Micron’s GDDR6 is to blame due to overheating, particularly since ExtremeTech uncovered that replacement models are turning up with Samsung’s VRAM instead. This could, however, simply be a result of limited availability.

Regardless, the firm has stated that it “stands ready to help any customers who are experiencing problems,” meaning Nvidia will make it easy to replace affected GPUs.

KitGuru Says: Hopefully the RMA process has been streamlined for those experiencing these particular problems, as we know how difficult it is to go without a GPU. Have you experienced any issues with your hardware lately?