Late 2020 saw the release of three RX 6000-series graphics cards, so it was only a matter of time until RDNA 2 trickled down to the mid-range. That's what AMD announced today, in the form of the new RX 6700 XT graphics card. Targeting 1440p gamers, this new GPU is set to launch on March 18th with an MSRP of $479. Here we go over everything we know so far. 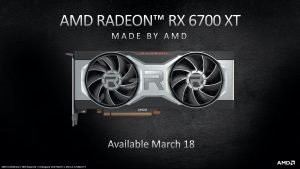 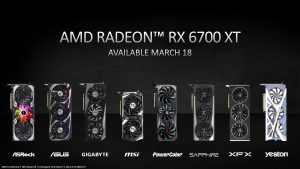 Now, I can already imagine a lot of comments about stock and availability, and we were able to ask AMD about the supply situation yesterday. The representatives we spoke to were fairly non-committal at the time, but later followed up with a statement via email which reads as follows:

“With the AMD Radeon RX 6700 XT launch, we are on track to have significantly more GPUs available for sale at launch. We continue to take additional steps to address the demand we see from the community. We are also refreshing stock of both AMD Radeon RX 6000 Series graphics cards and AMD Ryzen 5000 Series processors on AMD.com on a weekly basis, giving gamers and enthusiasts a direct option to purchase the latest Ryzen CPUs and Radeon GPUs at the suggested etail and retail price.”

The key phrase for me there is ‘significantly more GPU's available for sale at launch.’ What that means in practice, we can't yet say, but a hundred GPUs is ‘significantly more' than 10, but still wouldn’t be enough meet demand, so I guess we will just have to wait and see how the launch unfolds. Given the events of the past few months, I'd say I'm not overly optimistic but would be very pleased to be proved wrong. 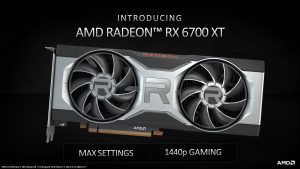 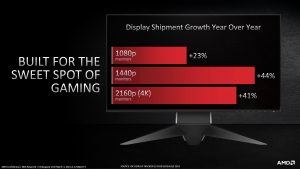 Back to the 6700 XT itself though, in terms of product positioning AMD was very clear about this GPU being targeted for 1440p gaming at maximum image quality settings. AMD sees this segment as a key focus, pointing to data from IDC showing the 1440p display market was the fastest growing monitor segment year-on-year, from Q3 2019 to Q3 2020. 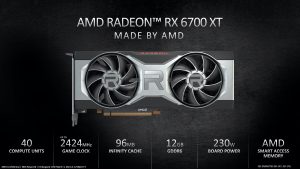 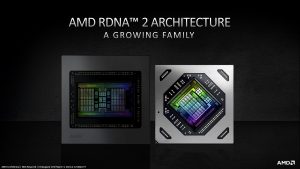 In terms of specifications, at the moment we only have a very high-level overview of this new GPU, with more detail set to be laid out in the coming weeks. We can infer a little bit more than what AMD has explicitly told us though, so let’s go over that here.

First up, we know the 6700 XT will be using a new Navi GPU – codenamed Navi 22 – which features 40 Compute Units (CU). Each CU houses 64 stream processors with RDNA 2, so that’s a total of 2560, or exactly half compared to the RX 6900 XT. It’s also one third fewer cores than the RX 6800, so that’s quite a significant decrease in overall core count considering there’s just a 100$ price gap between the two cards. Barring any (unlikely) architectural changes, a total of 40 CUs mean we can expect 64 ROPs and 160 texture units for this GPU, alongside 40 ray accelerators.

Next we have the clock speed, and this is a pretty interesting area as AMD claims ‘up to' a 2424MHz game clock. This is significantly higher than the RX 6800, which has a game clock of 1815MHz. I would suggest that such a high clock speed for the 6700 XT will offset some of the performance loss versus the RX 6800, which will come as a result of having 33% fewer cores. Game clock can vary from application to application though, so real-world behaviour is definitely something for us to test in our review. 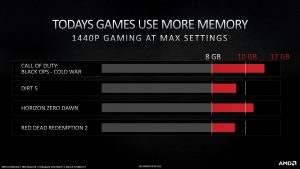 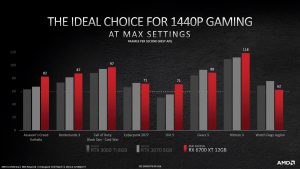 As for the Infinity Cache and Memory, we’ll take these together. AMD was fairly obvious in pointing out that 12GB GDDR6 on the 6700 XT is more than the RTX 3060 Ti and RTX 3070, both of which have 8GB GDDR6. However, outfitting the GPU with 12GB VRAM also means that AMD is almost certainly using a narrower 192-bit memory interface, so assuming the use of 16Gbps memory, we’d be looking at memory bandwidth hitting 384GB/s – and that’s slower than the 448GB/s bandwidth achieved by the RTX 3060 Ti/3070.

With the Infinity Cache however, we can expect a boost to the effective memory bandwidth, but we’re currently unsure of the details. We know it’s a 96MB cache, compared to the 128MB cache on the Big Navi GPUs, and we would expect it to be slower with the 6700 XT, but right now that’s all we know.

The last key spec to go over is power draw. I do find it fascinating that the 6700 XT is rated at 230W total board power, as that’s just 20W, or 8%, lower than the RX 6800, despite having a third fewer cores. This is something I will be asking AMD about as soon as possible, but my guess would be the GPU is channelling the power to increase clock speeds rather than having more cores, which could pay off for 1080p and 1440p gaming. It’s also interesting that there is no ‘up to’ before the board power rating, suggesting for now at least that we won’t be seeing the rumoured 189W model just yet.

In terms of early performance numbers, right now we only have what AMD showed us, so do take these with a fair amount of scepticism as they are 1st party benchmarks. Positioned against the RTX 3060 Ti and RTX 3070 in 8 modern games, performance was shown to be anywhere from slightly slower than the 3060 Ti in Watch Dogs: Legion, up to significantly faster than the RTX 3070 in Assassin's Creed Valhalla and Dirt 5. 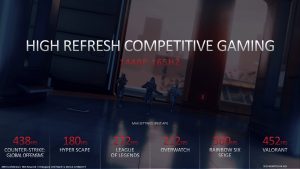 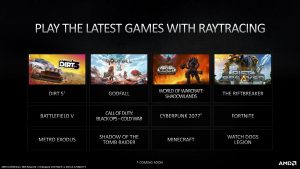 AMD also teased performance figures in six esports titles, including CS:GO and League of Legends, but these were presented without performance comparisons and simply indicate this GPU is up to the task for competitive 1440p/165Hz gaming.

As for ray tracing then… casting our minds back to the RX 6800 XT reveal, at the time I thought it was suspicious that AMD didn’t compare Big Navi to any Nvidia GPUs in terms of ray tracing performance, and the same thing has happened here. There's no ray tracing performance numbers at all for the RX 6700 XT, instead we were shown a list of the games which support ray tracing. I know from my own testing that in some instances the RX 6800 can actually be slower than the RTX 3060 Ti in terms of ray tracing, so it’s safe to say my hopes aren’t too high for the RX 6700 XT in this regard, but again we’ll just have to wait to test that for ourselves.

In a nutshell then – RX 6700 XT is coming March 18th, MSRP is set at $479, and it's targeting 1440p gaming/RTX 3070 head on. One gets the feeling that availability will determine the success of the launch more than actual performance though, so let's see what AMD can do in two weeks time.

KitGuru says: RX 6700 XT certainly looks competitive based on what we've shown, but stay tuned for our full review in the coming weeks.