After launching as a PlayStation exclusive towards the end of last year, Hideo Kojima's Death Stranding was released on PC this week. Built on the Decima Engine, the same engine that powered Horizon Zero Dawn, we spent the last few days testing over twenty graphics cards to see what sort of performance you can expect from this game. Nvidia's DLSS 2.0 technology is also present, so naturally we put this to the test as well.

Right off the bat, it is worth saying Death Stranding can only be played using DX12, there is simply no option to use another API.

Apart from that, there are a few options to tweak within the settings menu – but not loads. The primary settings include model quality, memory allocation, shadow resolution, ambient occlusion, and screen space reflections. There are four presets in the game, which adjust those settings just mentioned – the presets start at ‘low', ‘medium,' ‘default', and finish with ‘very high.' Default is said to offer equivalent visual fidelity to console, but for our testing we used the very high preset.

We used the latest game ready drivers for our testing:

We tested a section early on in the game, where the player has to deliver a package to the Waystation West of Capital Knot City. We ran each benchmark three times, and present mean averages in our graphs. We use OCAT to measure average frame rates as well as 1% low values across our three runs. 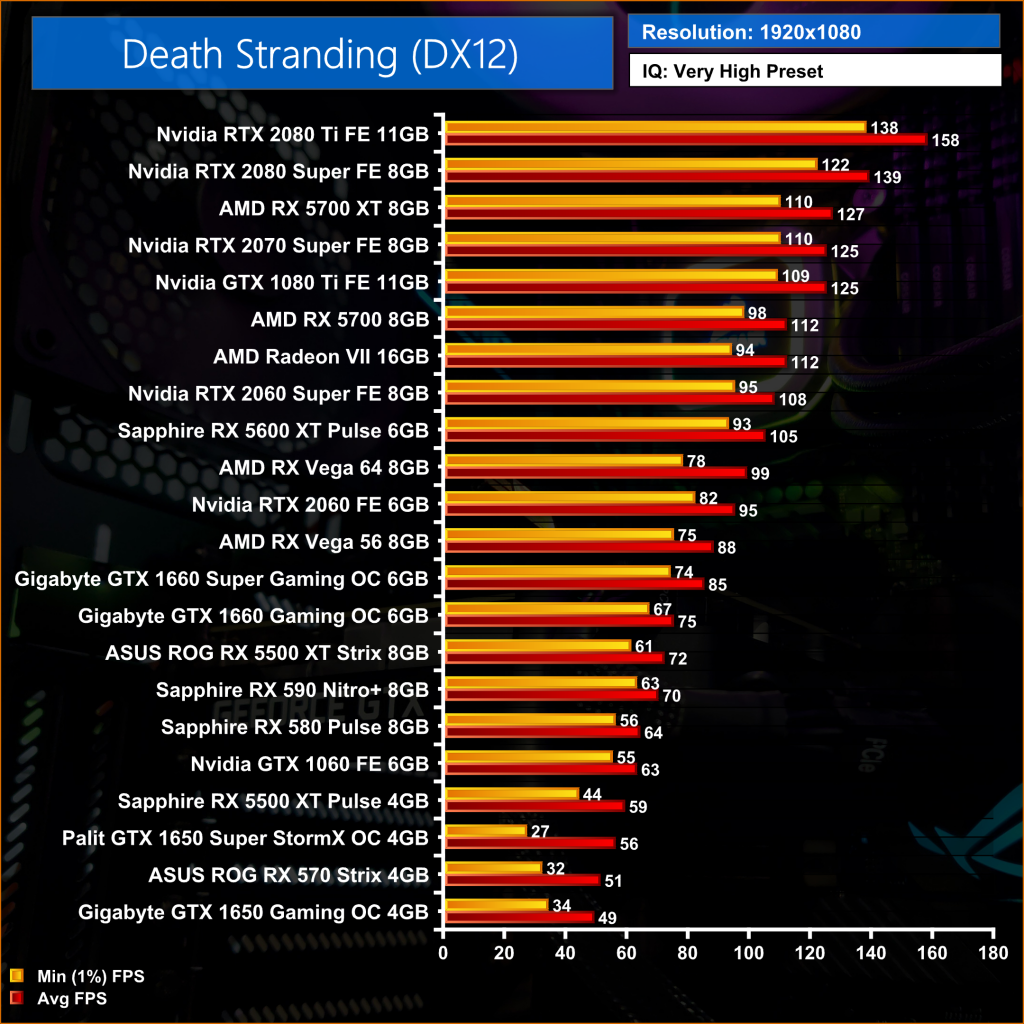 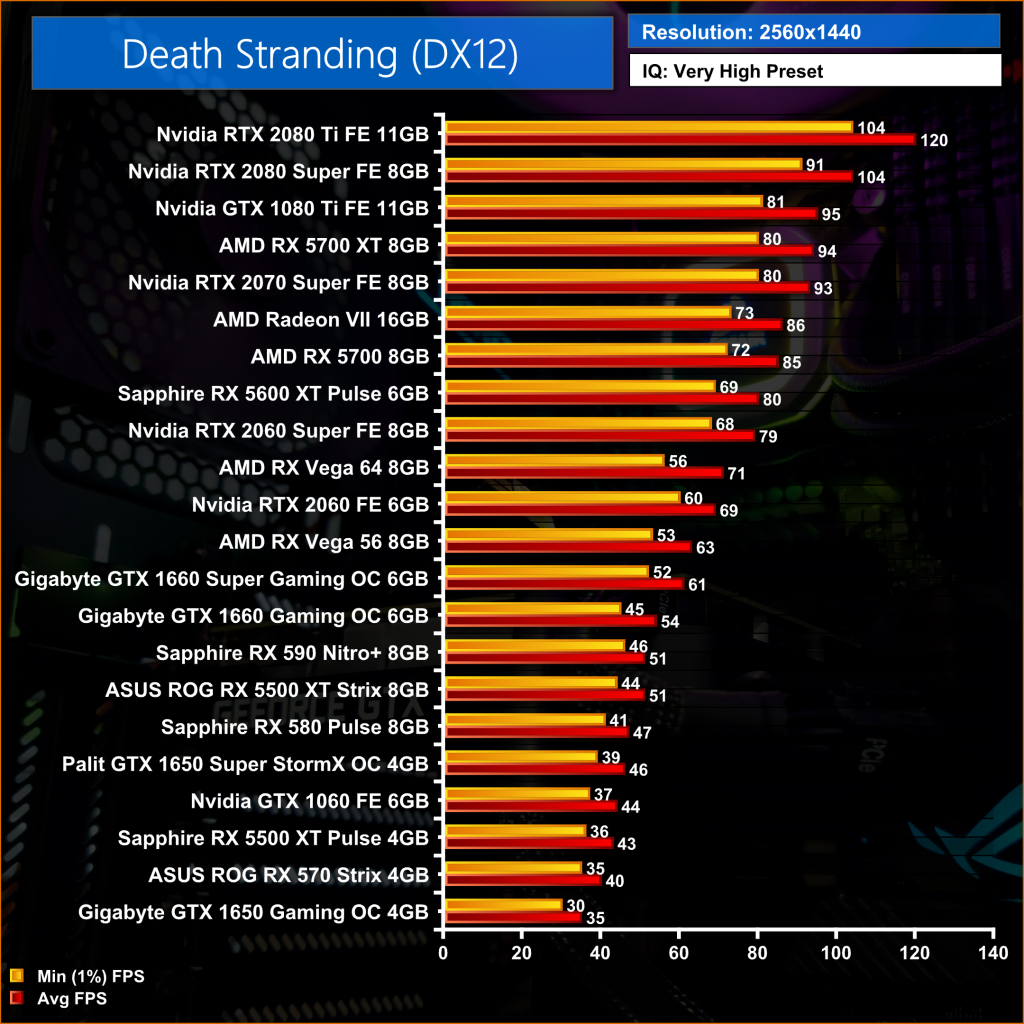 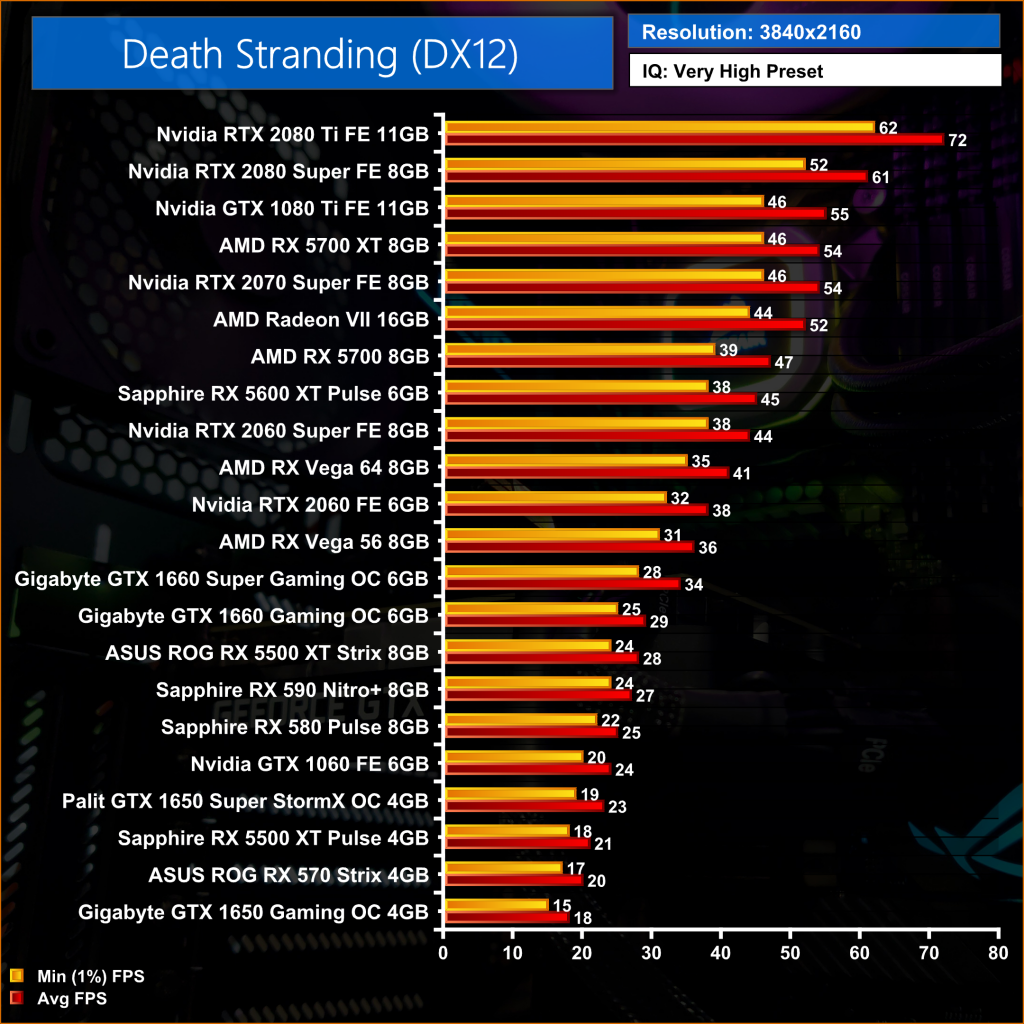 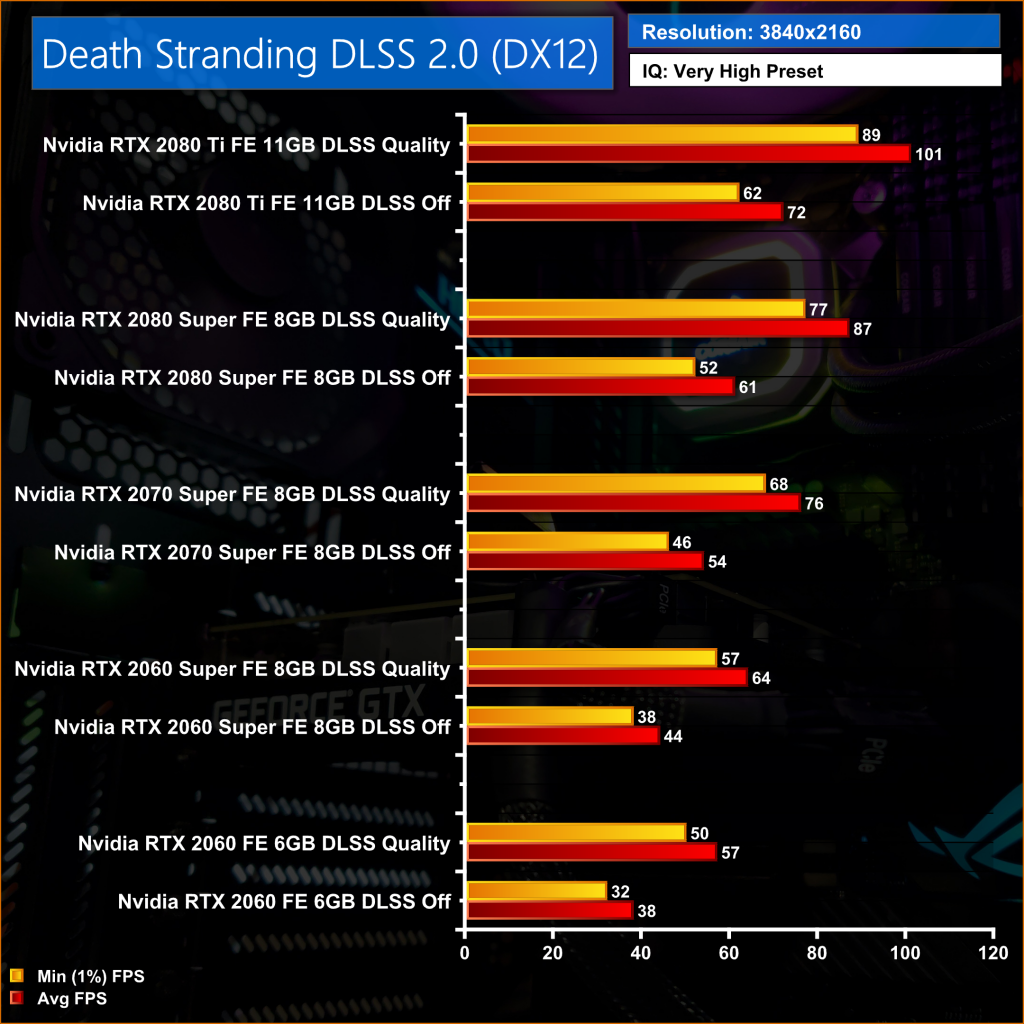 Death Stranding may not be as easy to run as something like Doom Eternal, but despite being a visually impressive title, it is still possible to hit decent frame rates without needing a brand-new GPU. GTX 1060 and RX 580, for instance, are perfectly suited for 1080p/60fps gaming using very high settings.

The only caveat to this seems to be cards with 4GB (or less) video memory, as all the 4GB cards we tested exhibited reduced 1% low performance. Gamers with GPUs that simply don't have 6GB+ of VRAM will likely want to stick to slightly lower image quality settings than the very high preset that we used here.

Those with Nvidia RTX GPUs will certainly want to check out the game's DLSS 2.0 options. We tested using the Quality DLSS mode, and visually it is very hard to spot any differences between native 4K and a DLSS upscaled 4K image. In fact, DLSS even helps certain objects, like text or fine edges, look sharper than native 4K when using the game's TAA implementation. It is highly impressive and is not something that can be ignored considering the performance improvements of between 40-50% we saw from our testing.

Actual gameplay, I must confess, did not appeal to me at all. I played through the first couple of hours and found it quite slow and tedious, while I had to sit through what felt like endless cutscenes. Maybe that's just me though, so if you've been waiting to check out Death Stranding, this port performs well and looks very good, so it's definitely worth giving it a go on PC.

KitGuru says: The game itself may not be my cup of tea, but Death Stranding is visually impressive and doesn't require a high-end GPU for a smooth gaming experience.