Doom Eternal is one of the most anticipated games of 2020, but when id Software release the minimum and recommended specs for the PC version, many gamers were left wondering if their systems would be up to scratch. After spending the last few days testing the game with a variety of graphics cards – at different resolutions and image quality settings – we can now present our full Doom Eternal PC Performance Analysis.

Just for some background information, Doom Eternal uses the new id Tech 7 engine, and the Vulkan API. Unlike Doom 2016, there’s no option to use openGL, Vulkan is the only API here.

Another important aspect of the game is how it manages its image quality settings and your graphics card’s VRAM capacity. There’s a total of 6 IQ presets, ranging from ‘Low' to ‘Ultra Nightmare'. My initial intention was to benchmark all our GPUs using the Ultra Nightmare setting, just to see what kind of performance you can expect from the game with the eye candy cranked as high as it will go.

id Software had other ideas however, as there are strict limits on VRAM capacity – if you try to apply an IQ setting which will use more VRAM than is physically available from your graphics card, it simply won’t let you and a little message pops up telling you to lower the settings. What that means is, you are going to be limited by your GPU’s memory in your choice of IQ settings. As an idea, here are the VRAM requirements for all of the game's IQ presets for 1080p:

The one caveat I found with those VRAM limits was gaming with Low settings at 1080p. I thought it was a bit harsh that you simply wouldn’t be able to run the game at 1080p Low if you didn’t have at least a 3GB card, so I tried installing a 2GB GTX 950 to see what would happen. Thankfully, the game did let me run 1080p Low with this GPU, even though the card didn’t meet the VRAM requirements, but trying to set the game to Medium settings resulted in that same ‘insufficient VRAM' message we touched on earlier.

So, that little quirk meant I had to do some thinking with how I tested the game, as I wouldn’t be able to run all my cards at the same settings. In the end, I decided to break up my testing into groups: so for all our GPUs with at least 8GB of memory, we tested those together using Ultra Nightmare settings. For all of our 6GB cards, we tested those with Ultra settings, and then for the 4GB cards, we tested those with High IQ settings. That does mean the frame rate numbers between charts aren’t directly comparable, but you will be able to see what sort of frame rate to expect depending on what card, and settings, you will be using.

Drivers were Game Ready versions supplied directly by Bethesda PR for both AMD and Nvidia GPUs: 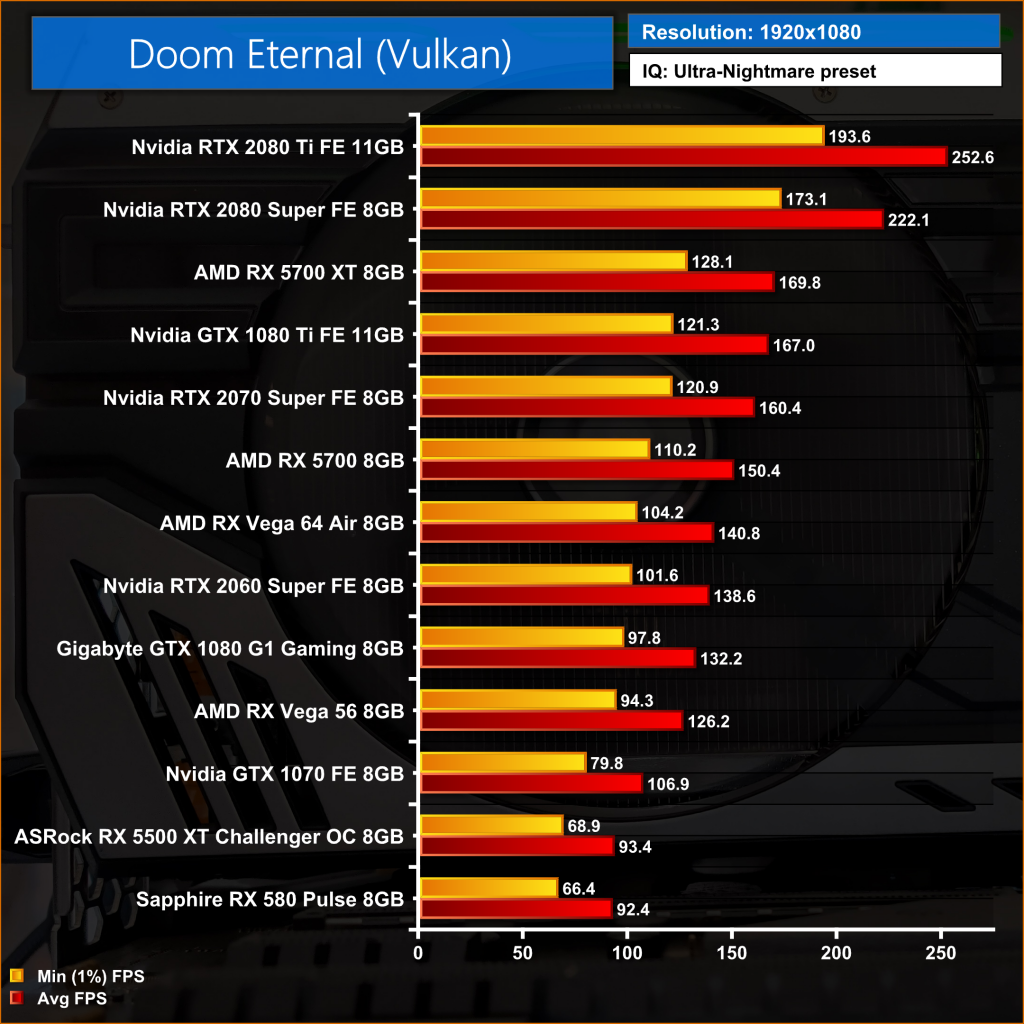 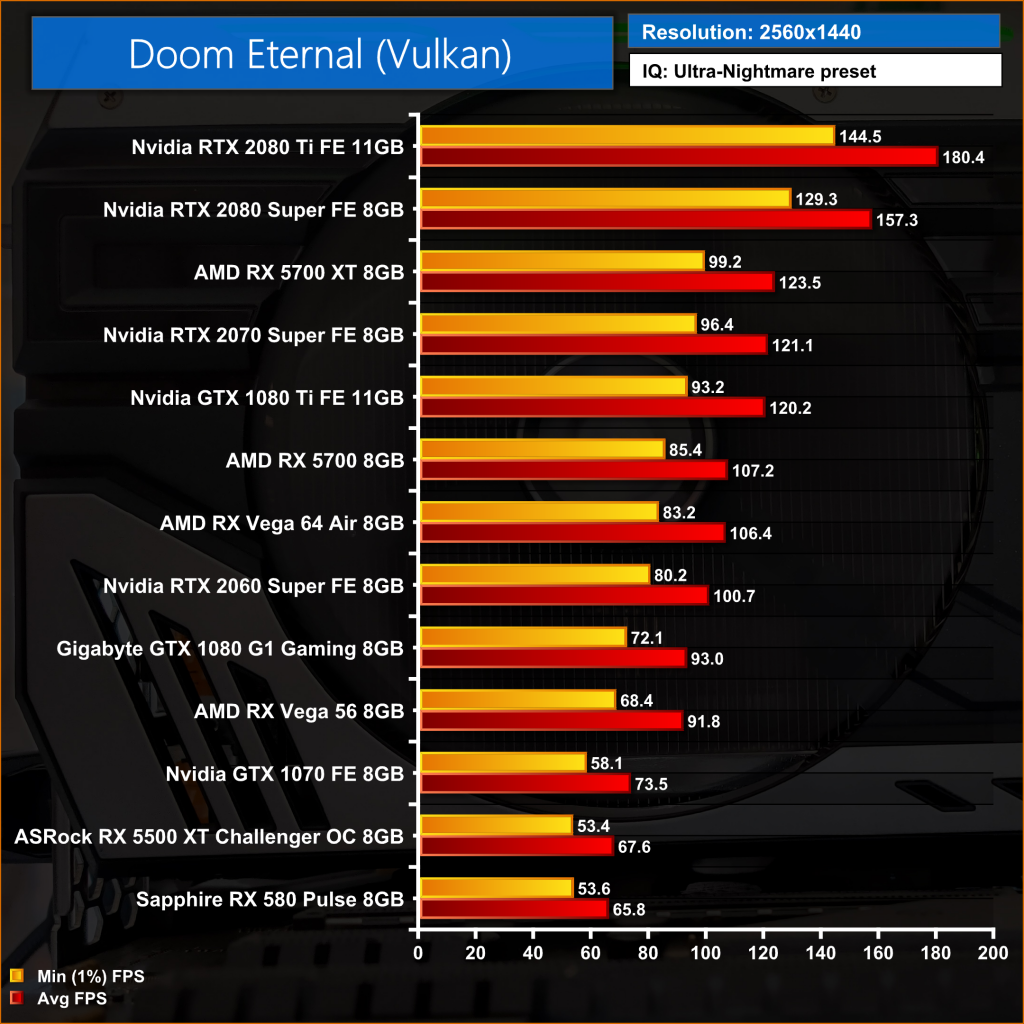 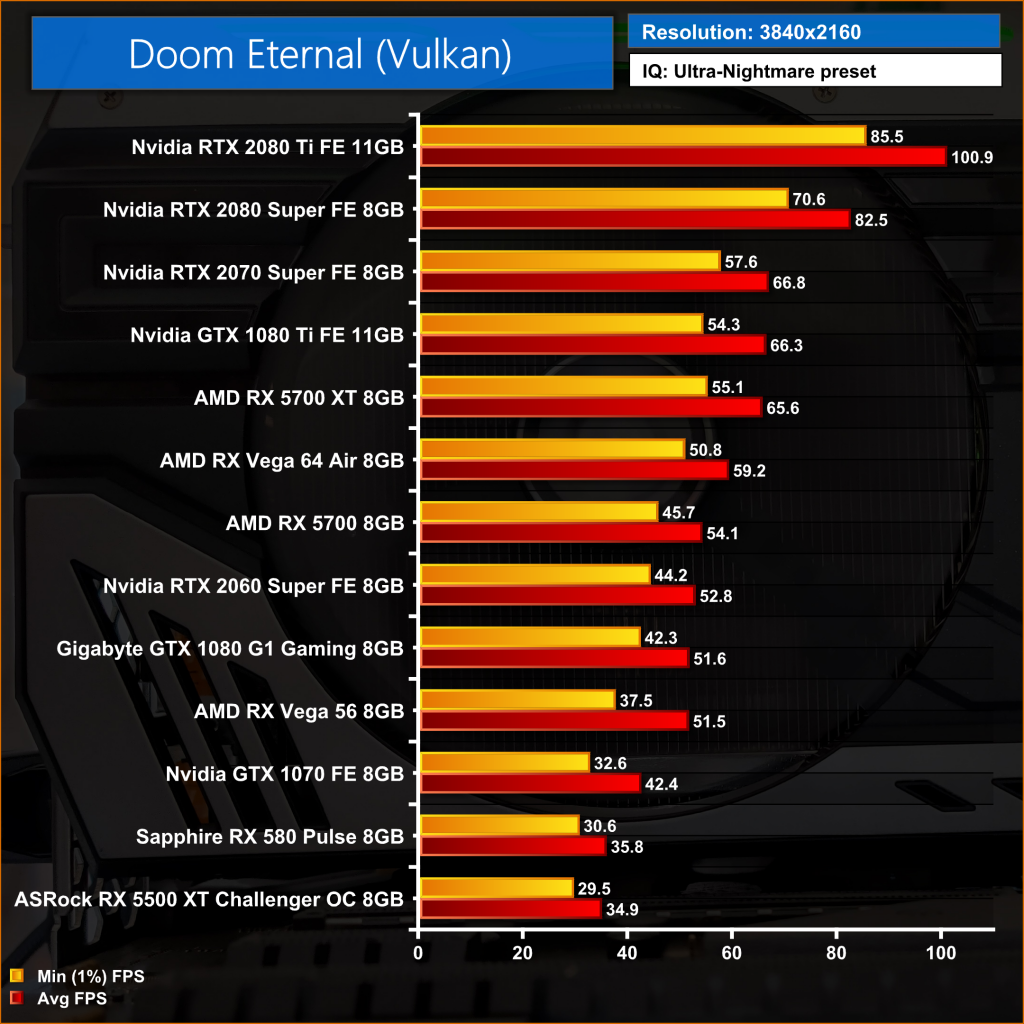 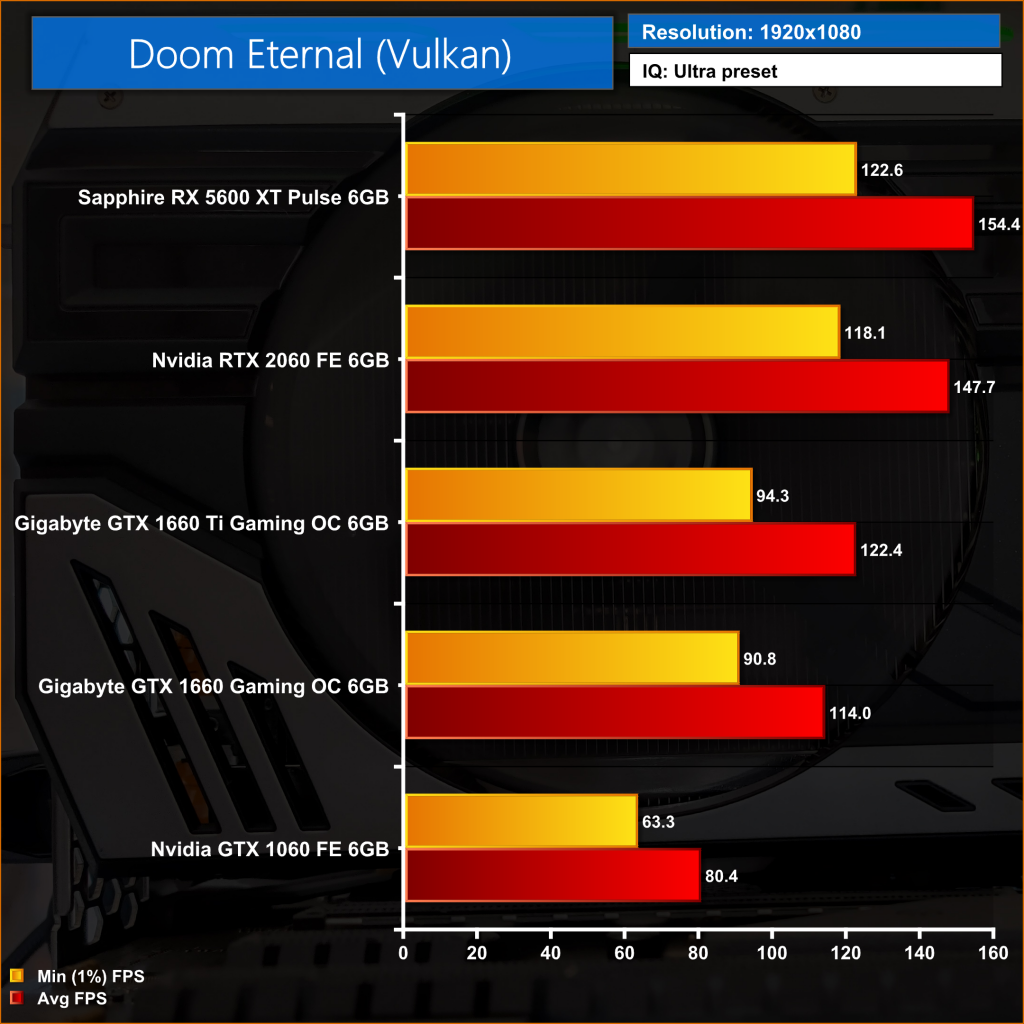 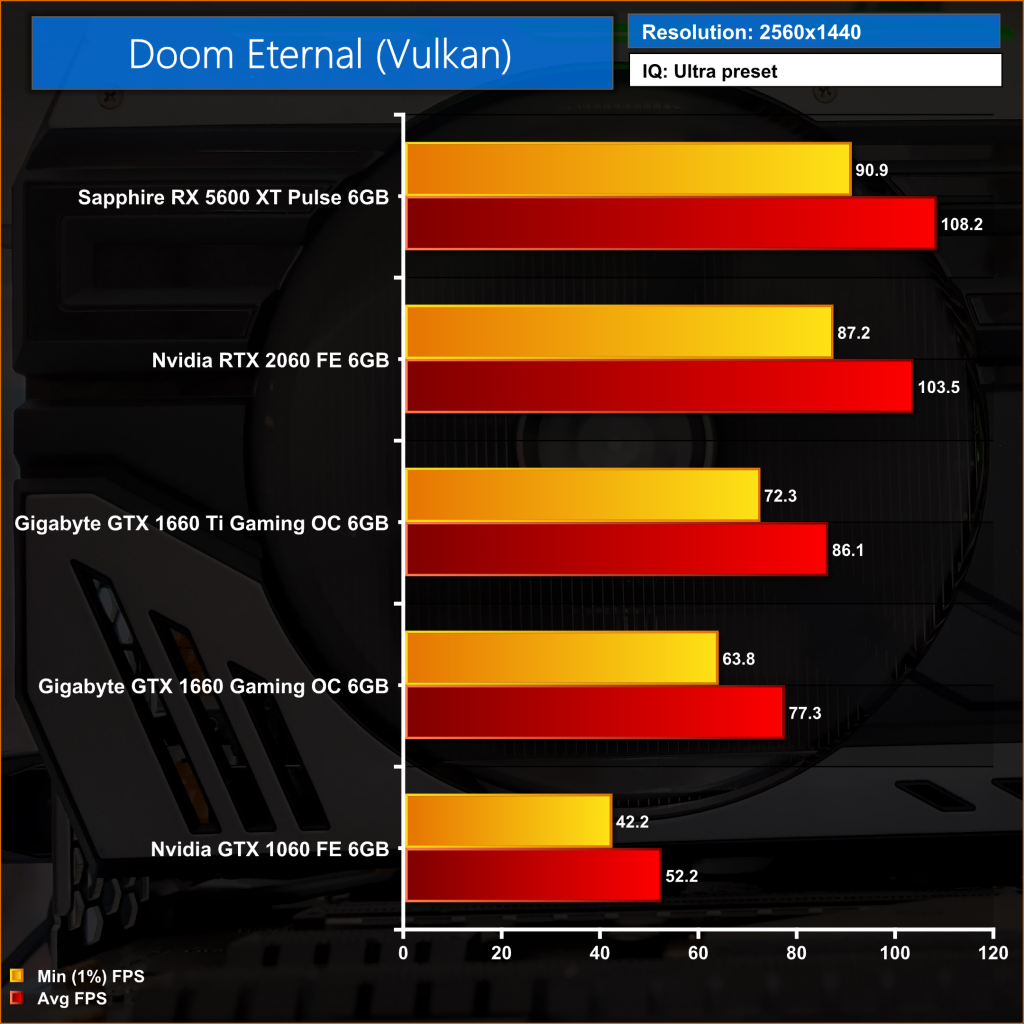 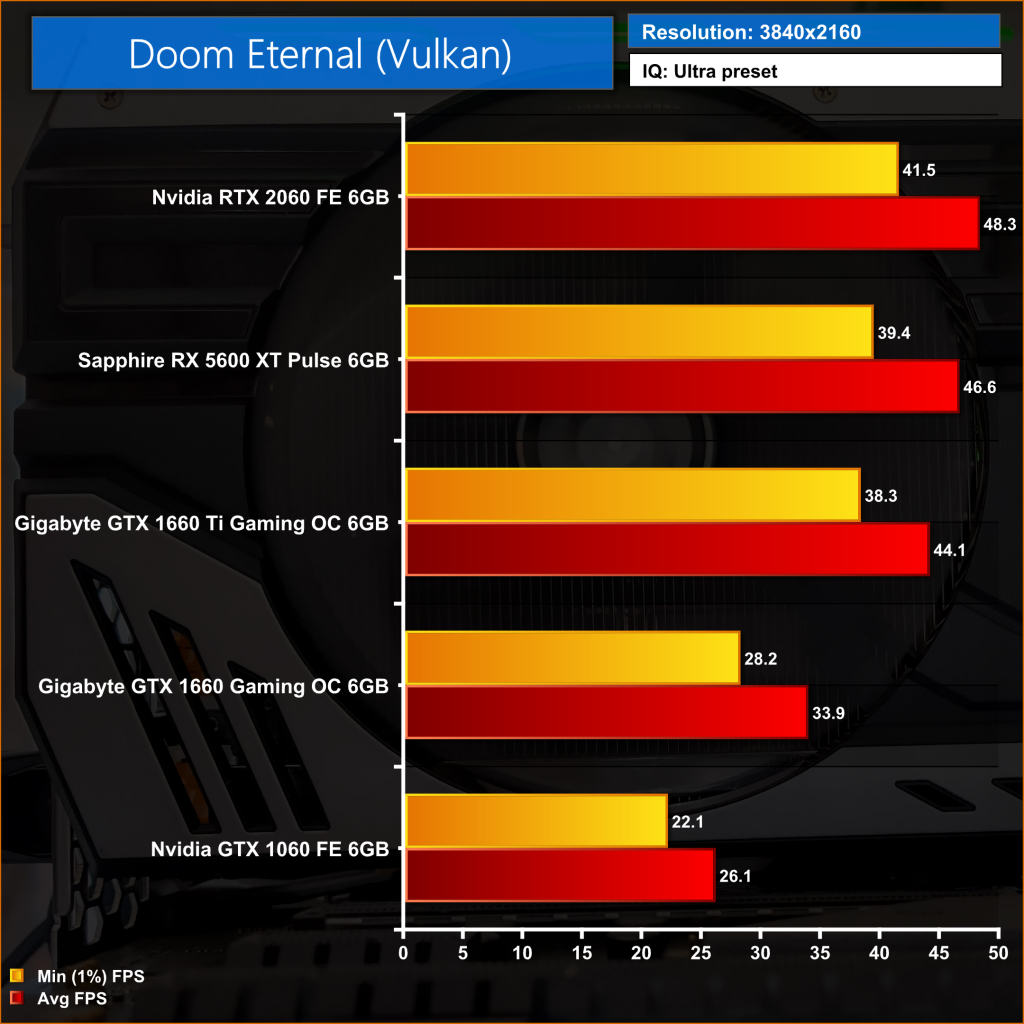 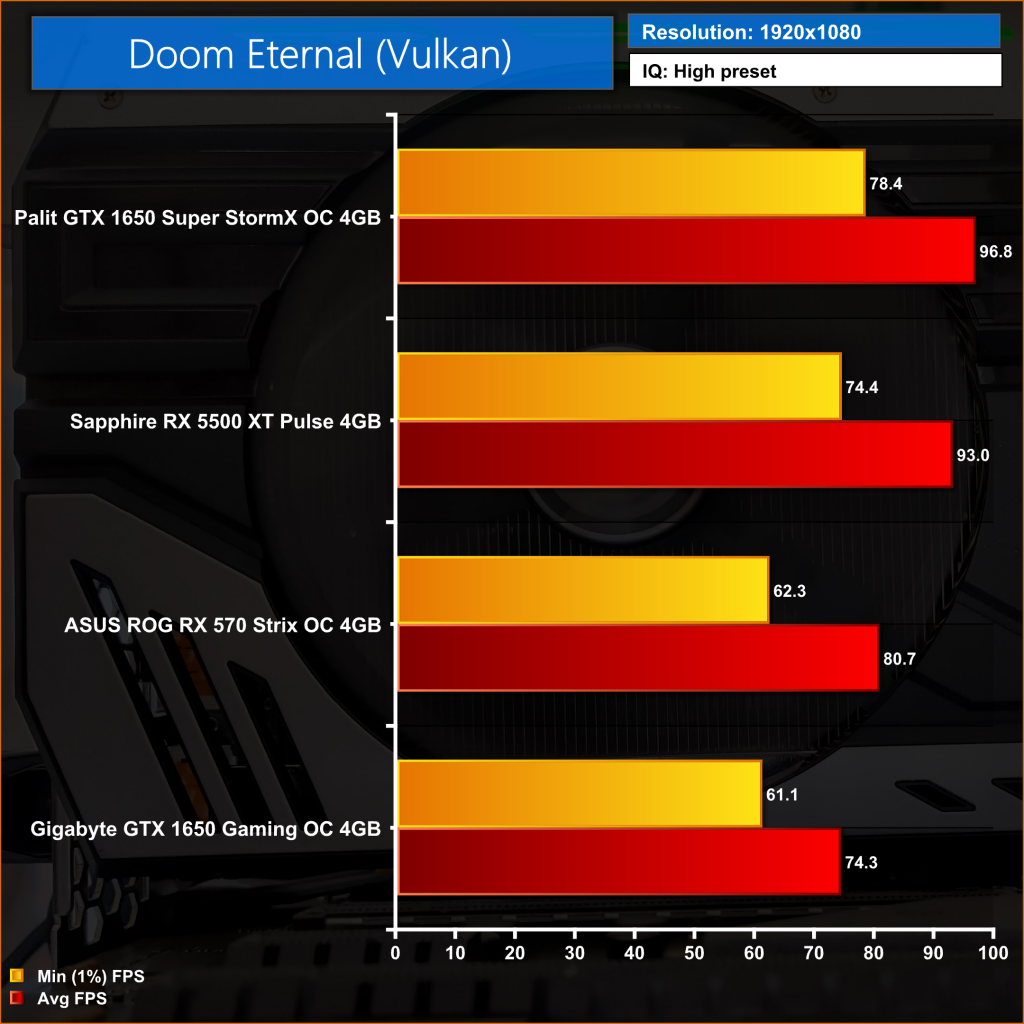 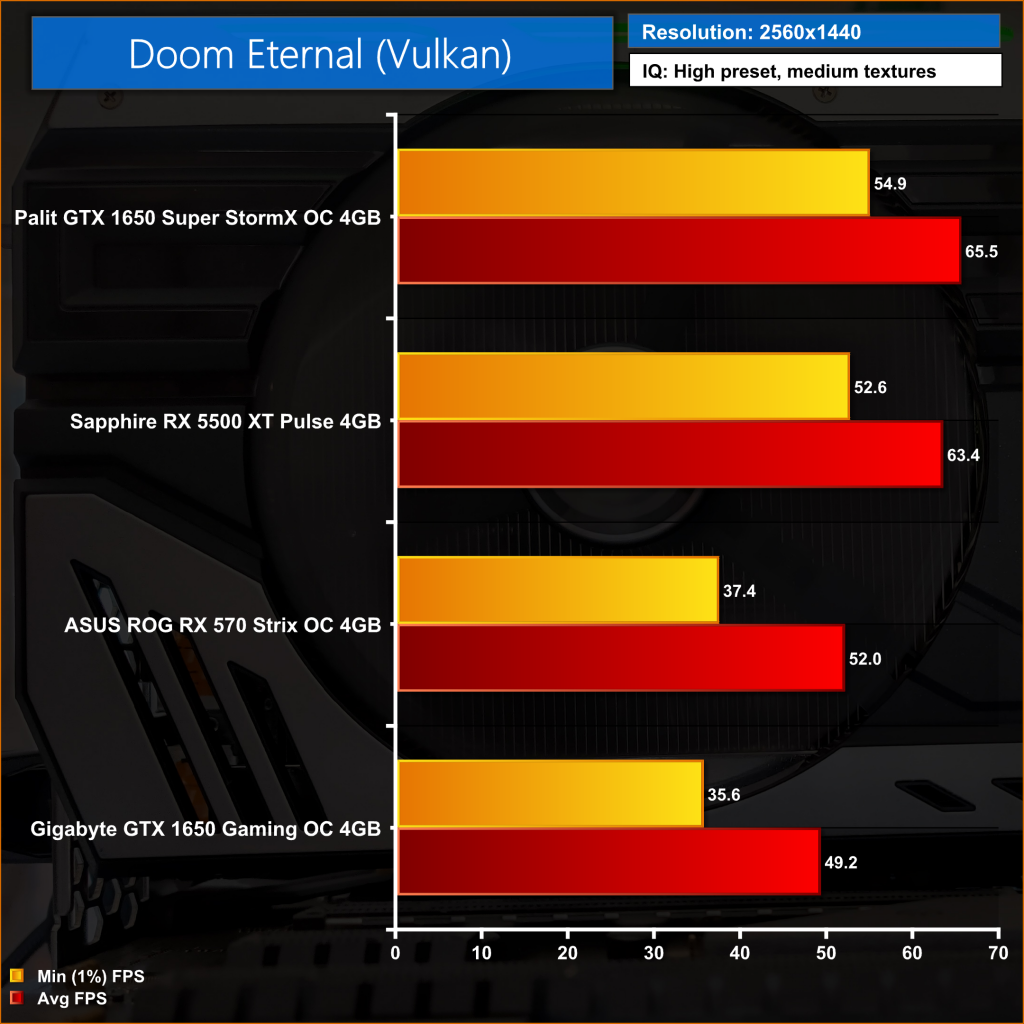 In a nutshell, I think it is crystal clear Doom Eternal runs very, very well on a wide variety of hardware. Gamers with high-end rigs using RTX 2080 Super or RTX 2080 Tis are set for even high-refresh rate 4K gaming, while cards like the RX 5700 XT and RTX 2070 Super can still push over 60fps at 4K, using Ultra Nightmare settings. More mid-range cards like the GTX 1660  and RX 5600 XT are still very ready for Ultra settings at 1440p, and even the GTX 1650 non-Super offers a smooth 1080p experience with High settings.

The main limiting factor is going to your GPU's VRAM capacity, as the game does enforce strict IQ settings based on the memory capacity available, so gamers with less than 4GB VRAM won’t be able to use Ultra settings and above.

That being said, I don’t think that is a huge issue, as even on the lowest settings the game still looks very good. Above I’ve got just a few example screenshots showing Ultra Nightmare side by side with Low settings, and while you can (just about) spot the differences between the two, it's not really a massive difference and Low settings looks really good. That’s especially the case once you are moving around, actually playing the game – considering how fast-paced Doom Eternal is, these image quality differences are even less significant than they otherwise would be.

KitGuru says: Do let us know how Doom Eternal performs on your system, and what you think of the game as a whole.