The latest phase of overpriced graphics cards might be coming to an end. According to a 3DCenter investigation into GPU market prices for current-gen AMD Radeon RX 6000 series and Nvidia RTX 30 series cards, the pricing of these cards is slowly reducing and stock is beginning to improve too.

Generally, the pricing of AMD cards is similar to as they were the past month, with the price of the Radeon RX 6800 series increasing, but the Radeon RX 6900 XT and the RX 6700 XT decreasing. However, most Nvidia RTX 30 series card prices have reduced, with the only one to increase being the RTX 3060 Ti. 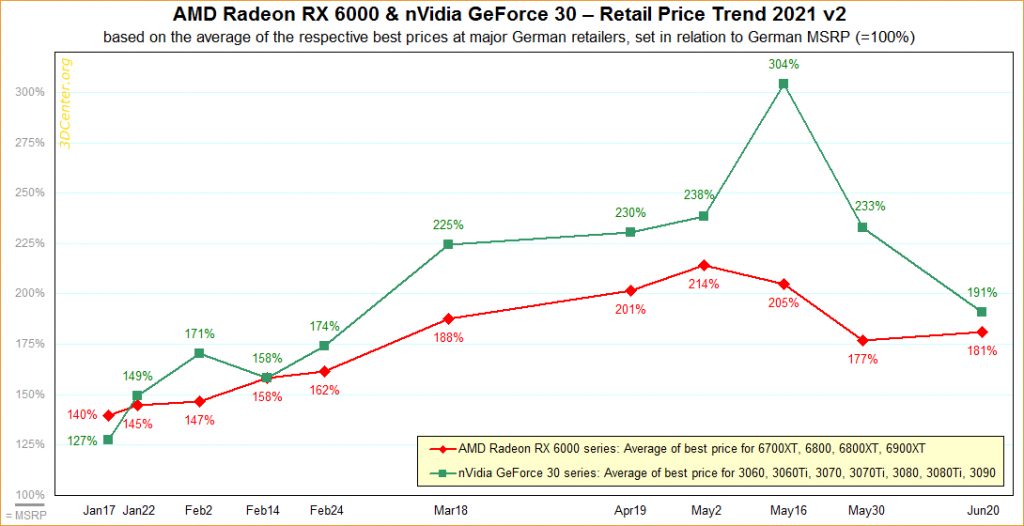 Despite the price reduction, Nvidia cards are priced on average 91% above the MSRP. As for the AMD cards, they cost about 81% more than their MSRP.

The following tables summarise 3DCenter's investigation on the pricing of AMD Radeon RX 6000 series and Nvidia RTX 30 series cards. All prices are as of June 20, 2021 and only deliverable offers were taken into consideration.

The reason behind the Nvidia price drop dates back to May, when the company shifted GPU production to LHR GPUs. After some time without shipping GPUs due to the transition from standard GPUs to LHR GPUs, the backlog of orders increased significantly. Once Nvidia started to ship the LHR GPUs and began to fulfil orders, prices reduced, and the stock increased.

KitGuru says: If Nvidia keeps shipping more LHR GPUs, the pricing and stock situation should improve, but probably slower than the past month as retailers will avoid selling cards at a loss.

Previous Microsoft teams up with Philips, ASUS and Acer to launch ‘designed for Xbox’ displays
Next Nvidia DLSS is now available for Unreal Engine 5 as a free plugin, support for Unity Engine 2021.2 coming soon