Owners of the Asus ROG Zephyrus Duo 15 SE are flashing a custom vBIOS with 155W TGP to increase the RTX 3080 laptop GPU performance.

Featuring a default TGP of 115W, increasing up to 130W through Dynamic Boost, the RTX 3080 laptop GPU found on the Asus ROG Zephyrus Duo 15 SE can have significant performance gains by flashing a vBIOS with higher TGP values. As seen on Baidu (via VideoCardz), some users are claiming that they have flashed the vBIOS of the MSI Leopard G76's RTX 3080 GPU into the RTX 3080 of the Zephyrus Duo 15 SE. According to Notebookcheck's list, the RTX 3080 GPU on the MSI Leopard 76 comes with a 155+5W TGP. 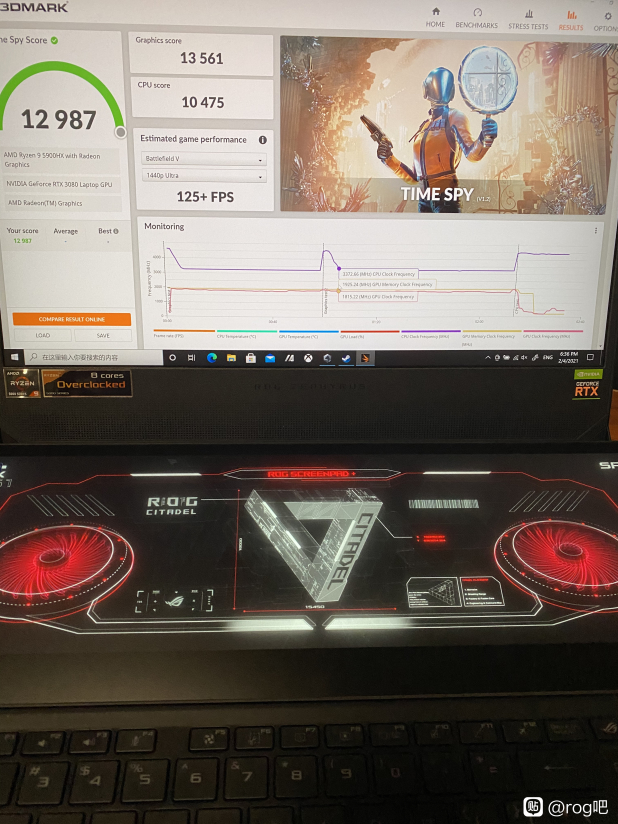 Let's compare the graphics score of the RTX 3080 with the original vBIOS on TimeSpy with the graphics scores of the RTX 3080 with higher TGP vBIOS in the same test. Using the 115+15W TGP vBIOS, the Asus ROG Zephyrus Duo 15 SE scored 10,717 points in performance mode and 11,407 points in turbo mode. With the 155+5W TGP vBIOS, the scores increased to 13,346 and 13,561, respectively. This translates into an increase of 24.5% in performance mode and almost 19% in turbo mode, offering about the same performance as an RTX 3070 desktop GPU.

We know that increasing the performance of your GPU might be tempting, but the benefit might not be worth the risk. Considering the limited cooling capabilities of laptops, when increasing the TGP of the GPU, users will definitely notice an increase in temperature and noise. Moreover, the power supply might not be capable of handling the extra 30W of power asked from the GPU, which can lead to instability. Lastly and most importantly, you will lose the warranty of the product you just bought.

KitGuru says: Are any of you thinking about picking up an RTX 3080 powered laptop? Would you be tempted to flash the vBIOS for extra performance?