Intel has been working on its DG2 graphics cards for years now, with plans to launch in late 2021. It could take a bit longer for these graphics cards to be revealed though, with reports this week claiming that Intel is scheduling its DG2 launch to take place during CES 2022.

The report comes from Hardware Academy (via HXL), a Chinese content creator that operates on the Chinese social network Weibo. According to its “reliable” sources, Intel will release the DG2 cards during CES 2022. If this is Intel’s plan, then an announcement should come a few weeks before that.

According to past rumours, the Intel DG2 series will have 5 SKUs, featuring up to 512 EUs and 16GB of GDDR6 memory. Intel likely won’t release all five GPU variants at once, instead we expect to see the flagship GPU first, followed by the rest of the line-up throughout the year. Recent performance leaks have pointed towards the Intel DG2 512EU performing on par with an Nvidia RTX 3070 Ti.

At the moment, Intel is sending DG2 card samples to partners, finishing up the qualification phase. Then, it will proceed to mass production, and lastly, their release, which according to Hardware Academy, should be between January 3rd and 8th.

KitGuru says: Intel DG2 GPUs might be arriving a little later than expected, although late 2021 and the first week of 2022 aren’t that far apart. 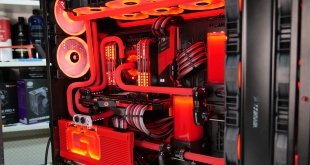 Over the last ten weeks, we've been hard at work building the AMD BEHEMOTH system - a modded, liquid-cooled, dual-system PC worth an astounding £22,000. Now, we're pleased to announce that we are giving away this system to one lucky KitGuru reader!