AMD's new RX 400-series graphics cards are on their way at the end of the month and while we already know quite a bit about the new range, we now know that there will be two versions of the RX 480, a 4GB model priced at $199 and an 8GB model priced at $229.

The $229 price tag is what AMD has suggested to retailers, so some partner cards may vary and custom cooled solutions will likely cost a bit more. However, this is still hitting the price point that AMD promised with the RX 480, which was under $300. AMD confirmed this pricing over on its Polish Facebook page. 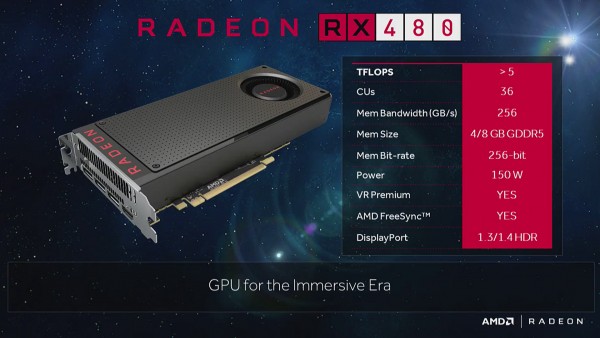 Speaking of custom designs, Gibbo over at Overclockers UK has also let us know that there won't be any available at launch on the 29th, instead AMD's first batch will all feature a reference designed cooler, which AMD has apparently “nailed” this time.

KitGuru Says: There is quite a bit of excitement for AMD's RX 480 thanks to its low price. How many of you are planning on picking one up? Will you be springing for an 8GB version or will you stick with the cheaper 4GB variant?

Previous Intel to fight massive $1.2 billion EU antitrust fine
Next G2A and TinyBuild both blame the other in pirate key controversy