Yesterday, the Intel HPC Developer Conference kicked off and as previously leaked, Raja Koduri was there to introduce its new GPU codenamed ‘Ponte Vecchio', based on the upcoming Intel Xe graphics architecture. This is the first Intel discrete graphics card to be named and detailed publicly, with plans to release as part of the Aurora Supercomputer project.

Intel's Ponte Vecchio GPU is optimised for AI and HPC convergence. Intel is also releasing the OneAPI too, an industry initiative to deliver a unified and simplified programming model for application development across heterogeneous processing architectures, including CPUs, GPUs, FPGAs and other accelerators. Intel says that this API is the result of “millions of Intel engineering hours” and “marks a game-changing evolution” from proprietary programming approaches to an open standards-based model. 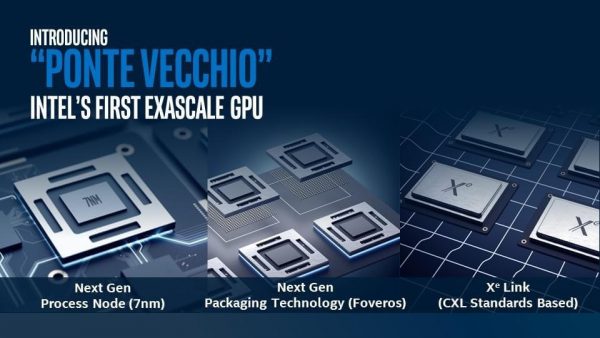 More specifics on the Ponte Vecchio GPU were also shared. The chip is going to be manufactured on Intel's 7nm technology and will be the first Xe-based GPU to be optimised for HPC and AI specifically. It will “leverage Intel's Foveros 3D and EMIB packaging innovations and feature multiple technologies in-package, including high-bandwidth memory, Compute Express Link interconnect” amongst others.

Ponte Vecchio and the OneAPI are both being built with the Aurora supercomputer in mind. The system will be housed at the Argonne National Laboratory and will be the first U.S exascale system to leverage the full power of Intel's data-centric portfolio of technologies. Two Intel Xeon Scalable CPUs and six Ponte Vecchio GPUs will combine with 10 petabytes of memory and over 230 petabytes of storage to deliver exascale performance to tackle scientific issues and crunch data faster than ever before.

Of course, Intel is targeting other areas with its Xe GPUs too, including workstations, datacentres, gaming, mobile and more. With that in mind, we will be hearing about other planned GPUs in 2020.

KitGuru Says: Next year is shaping up to be very exciting, with high-end Navi, Nvidia's rumoured next-gen RTX GPUs, Intel Xe and next-gen consoles all arriving to shake things up. Things appear to be on track for Intel Xe, so hopefully we'll have a few more Intel GPUs to talk about by the time Computex rolls around.

Previous Gigabyte teams up with G2 Esports for its new Z390 Aorus Master motherboard
Next Here’s every announcement from Exilecon, Path of Exile’s convention