Nvidia is set to kick off GTC in just a few hours time with a keynote live from Jensen Huang's kitchen. Details on what to expect are starting to pop up a little early though, with the first major leak revealing a new “Atlan” system-on-chip utilising improved CPU and GPU architecture.

Videocardz was sent a render of an upcoming Nvidia SoC this morning, codenamed Atlan. The image shows a new chip housing Grace-Next CPU and Ampere-Next GPU technology. The Atlan SoC is said to feature 12 CPU cores, which is just as many as Nvidia's previous “Orin” chip, although specifics on the number of GPU cores are still up in the air. 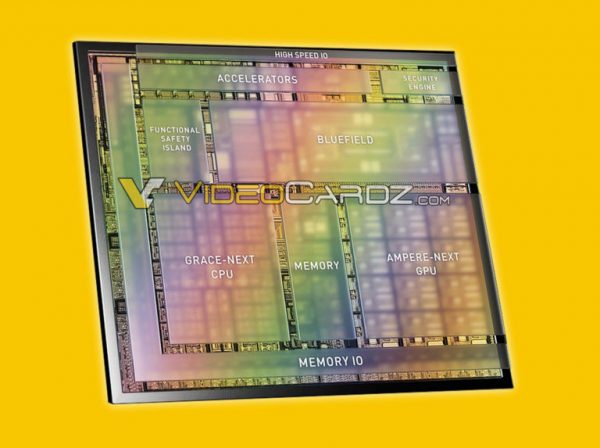 Grace CPU appears to be an internal name for Nvidia's processor, although this is similar to a GPU architecture that Nvidia is reportedly working on, named after computer scientist Grace Hopper. Currently, we're expecting a full announcement with more specific hardware details during GTC, which kicks off with a keynote from Nvidia's CEO at 16:30 BST today.

While this chip is largely expected to be geared towards the automobile industry, Nvidia is also said to be working with Nintendo on a new SoC for an upgraded Nintendo Switch console, which will utilise Nvidia's more modern Ampere or Turing GPU architecture with support for DLSS upscaling, so some technology may be shared across different SoCs.

KitGuru Says: This is all rumour for now, but with GTC kicking off later this evening, we won't be waiting long to get the full story.