Yesterday was supposed to be the grand launch of the RTX 3080 but unfortunately, many hopeful buyers were left disappointed. Some were able to get hold of the card of their choice but for the most part, retail websites were under such heavy traffic that many orders couldn't be processed, and before we knew it, most stock was completely sold out. KitGuru has been in touch with Nvidia to get a gauge on what happened and hopefully bring our readers some good news as to when new stock will arrive.

We put out a call to readers on Twitter to find out how many of you tried to buy an RTX 3080 yesterday and how many of you actually succeeded. The majority of those who tried to get hold of one yesterday were unsuccessful according to our poll:

We reached out to Nvidia this morning about this and were given the following statement: “Yesterday, we saw unprecedented demand for the GeForce RTX 3080 at global retailers, including the NVIDIA online store. At 6 a.m. pacific we attempted to push the NVIDIA store live. Despite preparation, the NVIDIA store was inundated with traffic and encountered an error. We were able to resolve the issues and sales began registering normally.”

To combat buyers using bots, as well as the scalpers that have already flooded eBay, Nvidia is “doing everything humanly possibly, including manually reviewing orders in an effort to get these GPUs in to the hands of legitimate customers.”

We were also told that over 50 retailers across the world had stock beginning at 6AM Pacific time yesterday, with RTX 3080 GPUs being produced all the way through August. Nvidia says it is “making them as quickly as possible” and that new shipments will arrive at retail every day. So if you are looking to get your hands on an RTX 3080, the best advice we can give right now is to keep checking retailers.

What we do not recommend is going to eBay, as a quick cursory search will show a slew of false bids on RTX 3080s, driving prices up into the £20,000 range or higher. 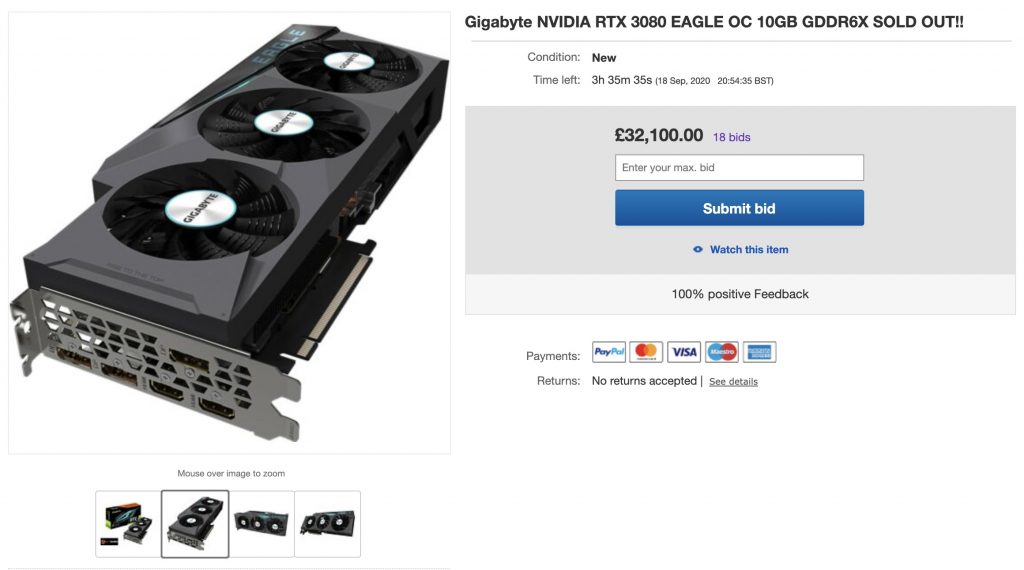 These appear to be fake, protest bids to stop scalpers from selling on at a profit immediately after launch.

KitGuru Says: Yesterday was a disappointing today for many PC gaming enthusiasts. What we do know is that more GPUs are being made and shipped each day, so hopefully in the weeks to come, a dent will have been made in the current demand. Did any of you try to get an RTX 3080 yesterday? What was the experience like for you?