While AMD’s RX Vega64 may have run into some pricing drama earlier this month, we have yet to see how things will play out with the RX Vega56. At its expected $399 price, Vega56 looks to be a great value card but prices may rise, so if you want to grab one early, you’ll want to keep your eyes peeled, as Vega56 is set to go on sale this afternoon.

In our review, we gave the RX Vega56 our ‘Worth Buying’ award, praising it for its strong performance against the GTX 1070. It is also a solid option for 1440p gaming we found. AMD’s MSRP for this GPU is $399 but if stocks run low, prices will rise, so you will want to get your order in early. For those looking to buy, the RX Vega56 should go live at retail at 2PM (UK Time). 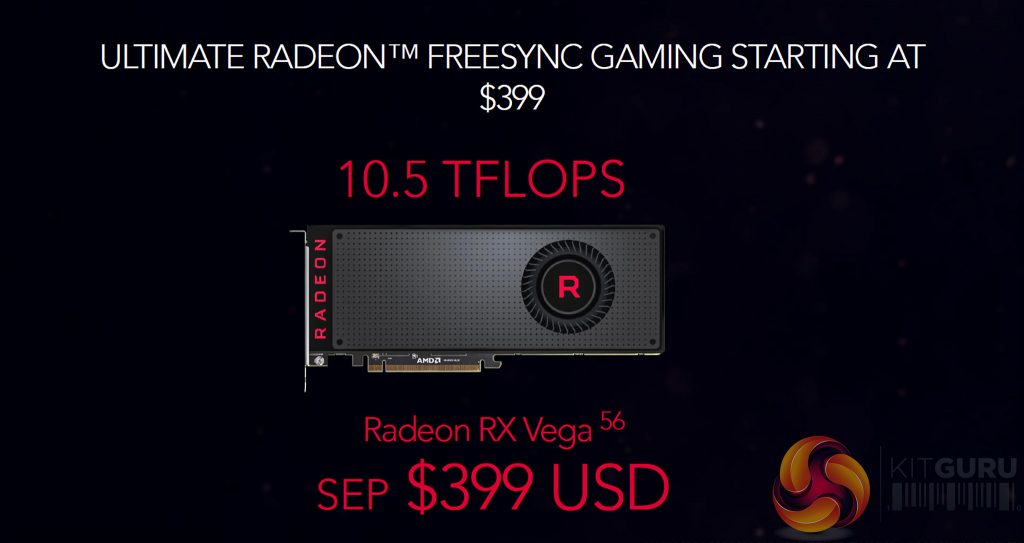 We will provide an updated post later with links to store pages and pricing information. Keep in mind that the $399 price tag is for the standalone GPU. There will be ‘Radeon Packs' on top, which increase the overall price but bundle in games or hardware.

UPDATE (14:10): At the time of writing, SCAN appears to be the only UK retailer with RX Vega 56 in stock. Prices (at the time of publishing) are pretty good, with in-stock models going for around the £380 mark:

Hopefully this pricing sticks, though it is worth noting that Scan also has Vega56 preorder listings going for as much as £500, so price hikes could occur if stock shortages hit. 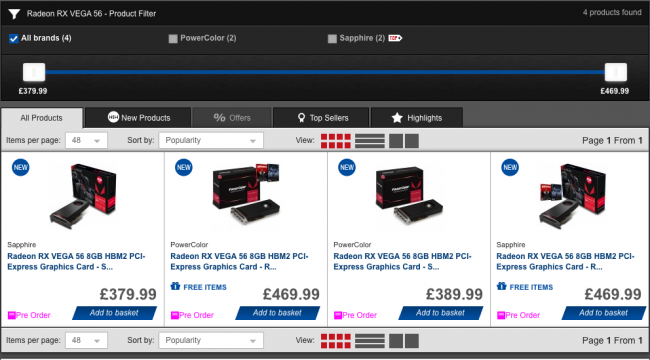 However, Overclockers UK's listings come with the proviso that the standalone GPUs are set at their launch prices only, as we saw with RX Vega64. With that in mind, it sounds like prices will end up rising.

KitGuru Says: RX Vega56 could end up being a great performer at its suggested price. Are any of you planning on grabbing a Vega card? Will you be trying to nab an RX Vega56 early?