The ray-tracing ecosystem on PC is getting a big boost this week, as the Khronos Group has officially launched its Vulkan SDK with ray tracing support. GPU vendors have also begun shipping drivers to support the new API on both Nvidia and AMD based systems.

Khronos Group has been working on finalising its ray tracing extension for Vulkan over the last month. Back in November, significant progress was made with the announcement of the final specification. Now, the extension is fully ready to roll out and be utilised by developers in games. 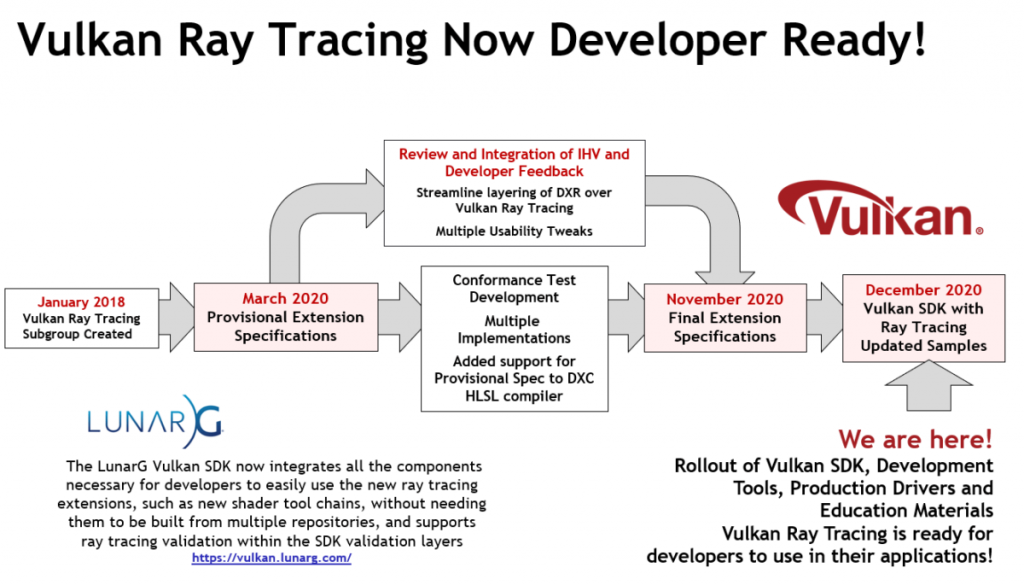 Like DirectX Raytracing (DXR), Vulkan Ray Tracing is a GPU vendor agnostic API for ray tracing in games, meaning it will work across a wide range of GPUs. Previously, Nvidia developed its own version of the Vulkan ray tracing extension in order to ship games like Quake II RTX. With the API now finalised, Quake II RTX will actually run on AMD graphics cards too.

Vulkan is already supported widely across the industry, so we can expect plenty of new games sporting ray-traced effects in the years to come.

KitGuru Says: With more APIs supporting ray tracing, we'll see more developers working to support it. Are you looking forward to seeing ray-tracing in more games over the next couple of years? If you have an RX 6000 GPU, have you tried Quake II RTX with the latest driver update?

Previous The Cyberpunk 2077 refund situation is a mess
Next Twitter fined €450,000 over GDPR violation