Pricing is an incredibly important element of a mid-range GPU so the RX 570, just like the RX 580, will need to be keenly priced to attract buyers over Nvidia equivalents, like the GTX 1060. At present the outgoing ASUS RX 470 Strix Gaming OC 4GB graphics card, that the new RX 570 version replaces, is £169.99, which is competitively priced and falls between the GTX 1050 Ti and GTX 1060.

Whether or not AMD will expect retailers to reduce prices of existing RX 470 inventories to make way for the RX 570 remains to be seen. However, what we do know is that the RX 570 will be more expensive than the RX 470 in whichever form it arrives so we are anticipating, but have not had confirmation, that the ASUS RX 570 Strix Gaming OC should cost around £170 to £180. Any more than that and the price is getting into the realms of irrationality. ASUS offers a standard 3 year warranty with this graphics card.

3 hours before the launch AMD sent Kitguru the official UK price list for its RX 500 series:

An hour before the review went live ASUS confirmed the pricing of the RX 570 Strix Gaming 4GB to be £219.99, an inflated price point given the cost of its RX 470 predecessor and AMD's suggested RX 570 4GB pricing. To make the situation tougher for ASUS KitGuru has observed Nvidia GTX 1060 partner cards retailing for as little as £215 (HERE and HERE) online.

In this instance the older ASUS RX 470 Strix Gaming OC 4GB graphics card, currently retailing for £169.99 at OCUK, makes considerably more sense since it is effectively the same graphics card. Prospective buyers should heed this advice until RX 570 pricing falls or RX 470 stock runs out. 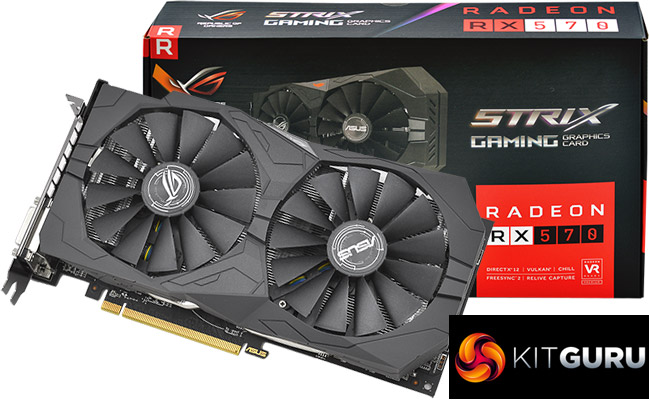 Overclocking headroom has changed very little and we actually saw a lower final core clock frequency than the RX 470-equivalent, even if the memory had better overclocking potential thanks to ASUS changing to higher frequency memory chips.

The RX 570 offers nothing new for existing RX 400 series owners and should only be considered for system owners on a mid-range budget who haven't upgraded for a good two years or more. Gamers still using crowd-favourites like the R9 390 or GTX 970 will also see no significant reason to upgrade here unless they go further up the GPU stack – RX 580, GTX 1060 or higher.

The ASUS implementation of the RX 570 is a mixed bag. On the one hand the cooling solution is effective with impressive temperatures, the overall design is attractive, the build quality is good, particularly the Auto Extreme-assembled PCB, and there a number of nifty extra features like the onboard 4 pin fan controls and RGB lighting for the ROG logo.

Negatively, the fan profile is simply too aggressive and under prolonged heavy usage the graphics card can get unpleasantly loud. Furthermore, the lack of a backplate leaves the product looking and feeling less premium than it should and from a functional perspective it contributed to higher PCB temperatures than on rival products.

KitGuru says: ASUS delivers a solid implementation of the RX 570 but it is only worth considering if the price falls closer to RX 570s from rival brands and cheaper RX 470 equivalents aren't available.